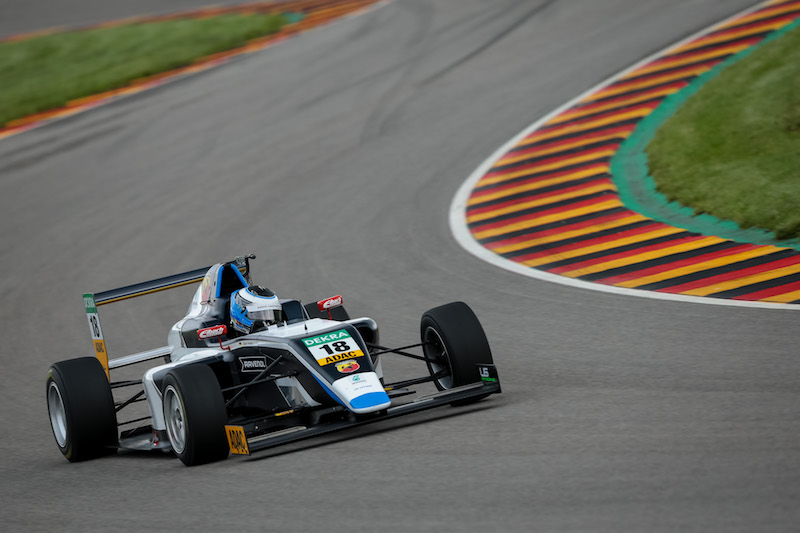 Julian Hanses won the opening ADAC Formula 4 race at the Sachsenring, as Marcus Armstrong was denied second at the final corner in a race he might have won but for a big crash at the start.

Hanses had claimed a double pole in a qualifying session where his US Racing team claimed four of the top five places, with Prema’s Armstrong the interloper in second.

The Ferrari-backed Kiwi made a better launch than Hanses to grab the lead, but that was in vain once the race was red-flagged for a big crash for Laurin Heinrich behind.

On the run to the first corner, Charles Weerts had veered left across the track, potentially due to damage after being squeezed between two cars. He tagged Oliver Soderstrom into a spin, and Heinrich was then launched over the rear of Weerts’ slowing car, turning him upside down.

While Heinrich was extracted from his car and taken to the medical centre, the race clock ticked down to 12 minutes remaining before the race restarted behind the safety car in original grid positions.

That put Hanses back in front and he was able to drive away from Armstrong to take his second ADAC F4 victory with a margin of two seconds.

Armstrong had to defend from the next US car of Fabio Scherer and lost out when the Swiss driver dived to his inside at the very last corner of the race.

Third still enables him to close to only 6.5 points behind his team-mate Juri Vips, who had to come from eighth on the grid after ending his qualifying session early with an off.

When the third title contender Felipe Drugovich dived inside Sophia Florsch at the final turn on the opening lap, banging wheels and earning a black-and-white warning flag as a result, Vips capitalised to pass both and finish fifth behind Nicklas Nielsen.

Florsch fought back against Drugovich to finish sixth, while the top 10 was completed by Frederik Vesti, Lirim Zendeli and Kim-Luis Schramm.