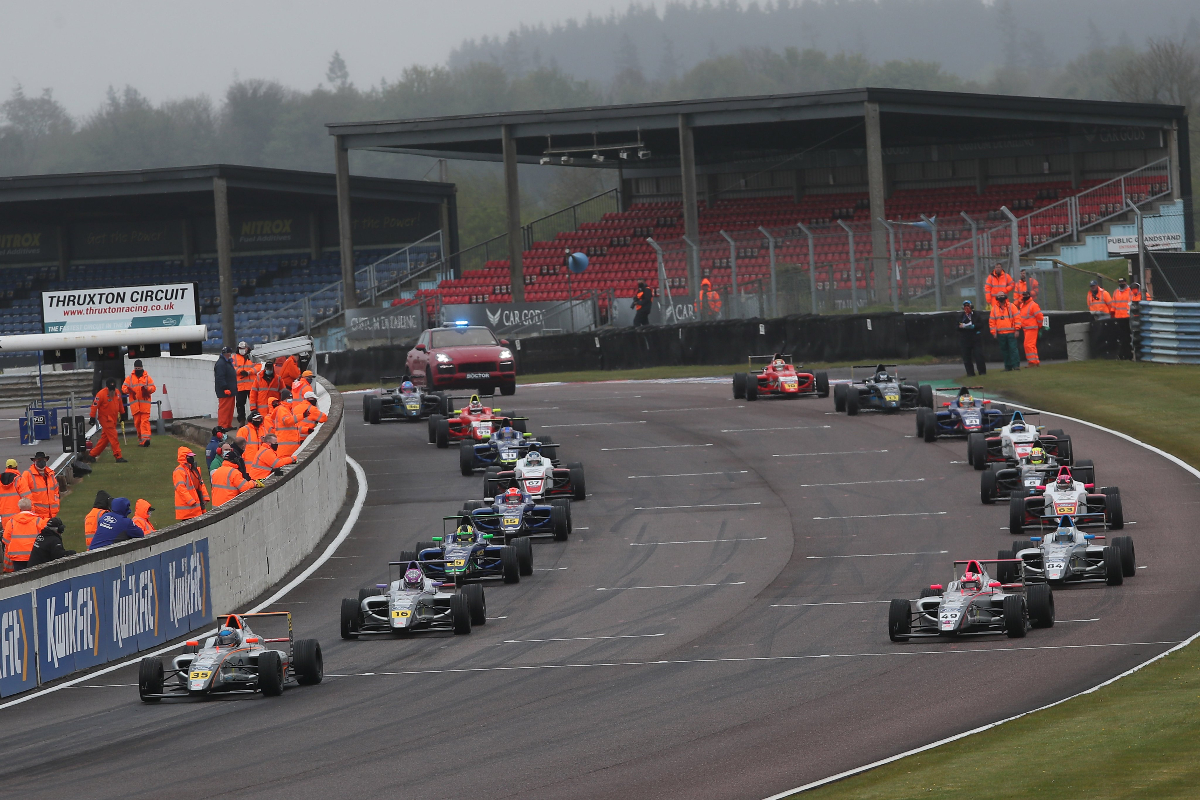 Loake jumped past poleman Matthew Rees off the line. He had fellow JHR driver McKenzy Cresswell on his tail through the first half of the race, but gradually began to pull away as the wet conditions made it harder to follow.

Cresswell was never too far behind, ready to take advantage of any mistake Loake made, but ultimately finished 0.903 seconds behind the race winner.

The race was initially red flagged at the end of lap one, in which Loake led after making a strong start.

Fortec Motorsports’ James Hedley and Carlin’s Kai Askey had come together at the chicane, and Askey’s car was sent bouncing over the kerbs. He collected Carlin’s Tasanapol Inthraphuvasak and hit the back of Argenti Motorsport’s Matias Zagazeta. The race was abandoned to be restarted in wetter conditions at the end of the day so as to keep the meeting on schedule.

All four cars were able to make the restart roughly an hour later, with Hedley lining up eighth on the grid. He spent most of the race in a train of cars running behind JHR’s Abbi Pulling in the battle for fourth. Dougie Bolger, who was running fifth, eventually managed to find a way through, with Oliver Gray and Hedley following not long after.

Hedley picked off team-mate Gray and Carlin’s Bolger and quickly closed the gap to Rees running third. Rees put up a good defence, allowing the race leaders to extend a gap at the front of the field. The race one and two winner managed to find a way through in the closing laps to extend his points lead.

Gray was also able to pass Rees on the final lap for fourth, while Bolger finished sixth.

Carlin’s Roman Bilinski had an eventful race. A spin for Fortec’s Joel Granfors almost collected him and he had to run wide to avoid him. Despite this, Granfors still clipped his car and it was a drive up through the field for both drivers. They finished seventh and eighth respectively, ahead of Askey and Inthraphuvasak.

Inthraphuvasak had been shown the black-and-orange flag, indicating he needed to pit due to damage, but stayed out. He was later handed a black flag, but took the chequered flag in 10th. If disqualified, Argenti’s Marcos Flack is promoted to the final points position.