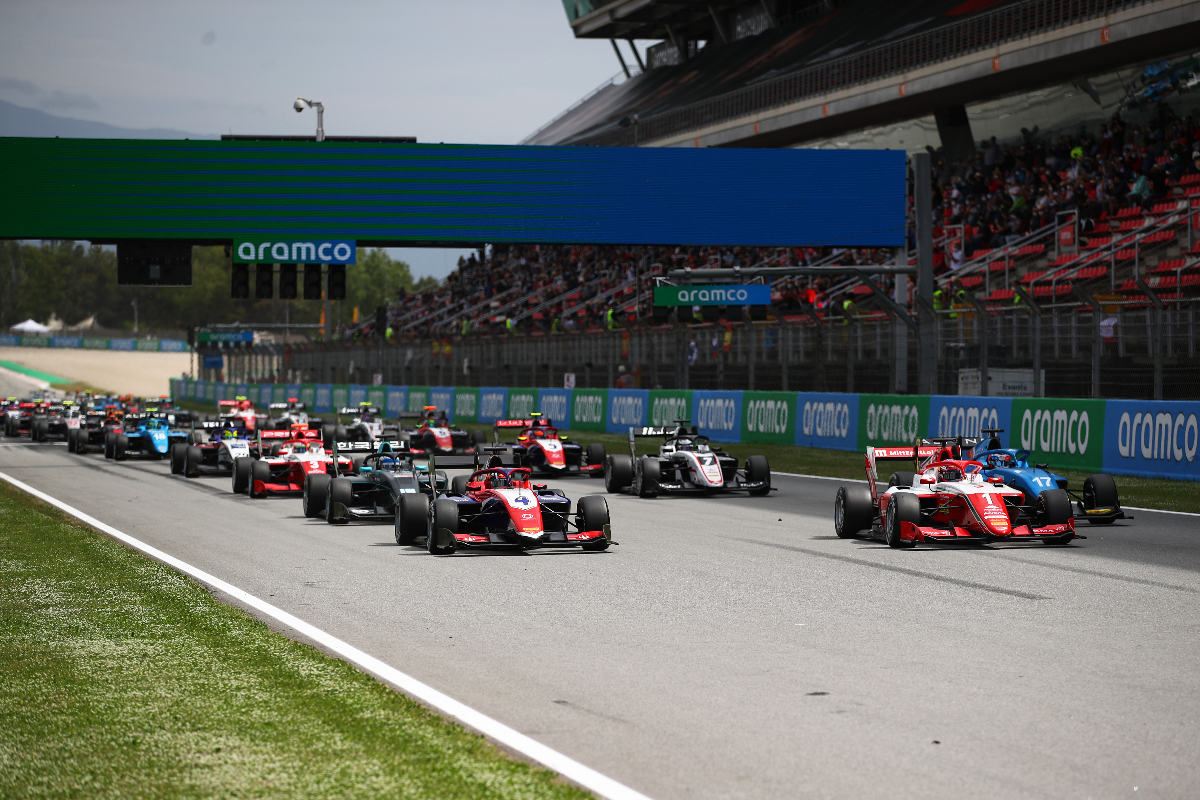 Three collisions took place through the opening two corners in the second race of the weekend, including between the leading pair on two occasions – first with Enzo Fittipaldi and David Schumacher, and then Dennis Hauger and Nannini.

At the beginning of race three, Prema’s poleman Hauger and fellow front-row starter Doohan didn’t get a particularly good launch and were battling four-wide with Nannini and MP Motorsport’s Victor Martins down the straight to turn one.

Hauger came out on top, while Martins slotted into second ahead of Nannini and Trident driver Doohan. In the post-race press conference, HWA Racelab’s Nannini spoke of this approach to the opening corner.

“Yesterday we were very close to the end, and to finish the race in that way, it was not happy for both of us, and it was one lap from the end,” he said.

“At the start, I just wanted to do a good start. I think I did it, obviously arriving four-wide in corner one, I didn’t want to take too many risks after what happened yesterday. I tried to stay as close as possible to Dennis at the beginning, but he was just too fast for me in sector three, I was losing quite a lot.”

Doohan also spoke about the start from his perspective: “Unfortunately, I didn’t get the start that I wanted.

“I thought I got slightly the jump on Dennis, we both bogged down, but I think the guys behind us got a slightly better start and I saw Matteo then kind of pulled in onto the pitlane, and if I stayed where I was then he would have been on the grass, and I had Dennis on the left of me.

“And so we were then four-wide going down into turn one, and I was kind of just hold my ground, but everyone kind of started to concertina and really it got quite wedged, so I felt like I needed to yield, unless there would have all been a big crash. From after yesterday’s result, and with the clutch in race one, and then in race two only getting three points with P8, it was important that I got valuable points today.”

Hauger added with his approach and admitted the moment gave him some nerves.

“When you’re going over 200kph, you’ve got some speed and it was so close, four-wide into turn 1,” he said. “I was really reaching for the deep braking there and trying to be the latest one and it paid off.

“After that it was just head down, [but it was] quite nervous going into turn 1 that’s for sure.”

HWA’s Nannini: FIA F3 ‘much harder’ to race in than F2