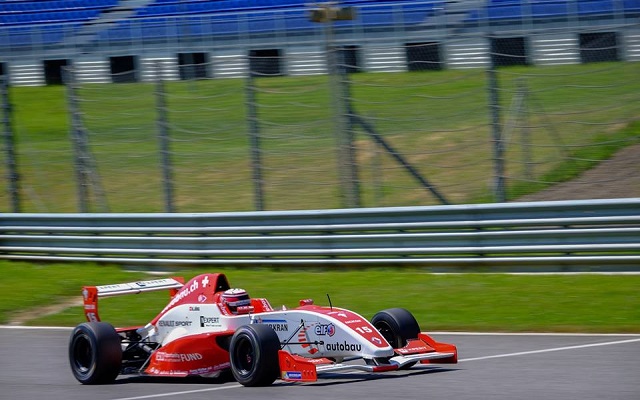 Deletraz started the race from pole position for the fifth consecutive time in NEC, but, as at Monza, the getaway proved an issue.

The Swiss driver was slightly sluggish off the line, which was just enough for Jorg to dive alongside into turn one.

And while Deletraz seemed to get a better exit, his teammate successfully defended into Remus, keeping the lead.

As expected after their qualifying pace, the JKR duo quickly began to check out from the rest of the field, led by third-placed rookie Jehan Daruvala.

And Jorg could not shake off Deletraz, his Swiss squadmate staying within a second for the majority of the race.

While Daruvala ran secure in third early on, his teammates Callan O’Keeffe and Alex Gill seemed to be held off by struggling championship frontrunner Ukyo Sasahara.

But O’Keeffe soon cleared the Japanese driver and set out after Daruvala, while Gill followed suit, harshly forcing Sasahara off into Castrol Edge and seeing him rejoin ahead before pulling off a stellar move into Remus.

As O’Keeffe finally caught Daruvala with seven minutes to go, the Indian began to seem nervous under brakes, locking his tyres massively corner after corner.

Despite that, he miraculously kept position for several laps, the constant lockups doing little damage to his pace.

Out front, Jorg suddenly came under massive pressure from Deletraz on the final lap, but kept hitting marks to deliver his first win of the year.

His teammate, however, will have little reason to be seriously upset with second place, having increased his points lead.

Yet another Fortec driver Ferdinand Habsburg was sixth, escaping undamaged after an early lunge that saw Darius Oskoui close the door and retire with a broken suspension. Colin Noble was also caught up, his race ending on the following lap

Dries Vanthoor passed Nikita Mazepin for seventh and, as his teammate tried to retaliate, he let Max Defourny through as well. Sasahara brought the car home to finish tenth.