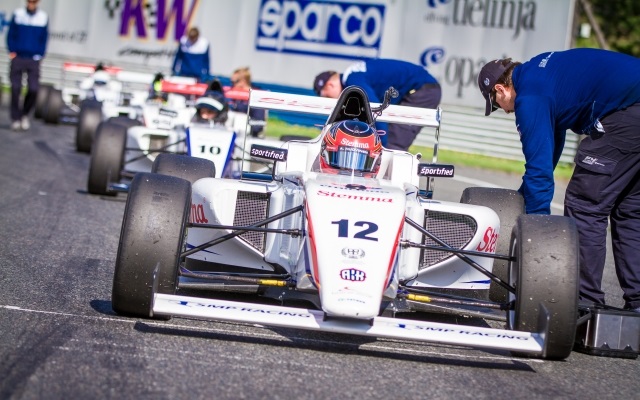 Having provisionally taken the pole position in the qualifying, Huovinen had to settle for second on the grid after Alexey Korneev‘s originally cancelled benchmark lap was given back to the Russian.

However, it was Vladimir Atoev who led the early part of the race, followed by Niko Kari and Huovinen, while Korneev dropped down after stalling at the start.

Kari then quickly worked his way past Atoev for the lead and, soon enough, so did Huovinen.

The latter went on to put pressure on his compatriot and, when Kari went on the inside line to defend in the final turn of the penultimate lap, he slightly ran wide, allowing Huovinen to storm past on the main sraight.

The Finnish 1-2-3 was completed by Niclas Nylund, who took advantage of a small contact between Atoev and Nikita Sitnikov with two corners remaining in the race. Nylund first darted past Sitnikov despite being briefly forced on the grass, before lunging on the inside of Atoev in the final turn.

Nerses Isaakyan took sixth, closely followed by Aleksander Maslennikov and Artem Kabakov, while the top ten was completed by Denis Mavlanov and Ivan Matveev, the latter recovering from a late crash that ended with Korneev in the gravel.

UPDATE: Niclas Nylund was penalised for overtaking under double-waved yellows and was demoted to ninth. Atoev inherited the podium.