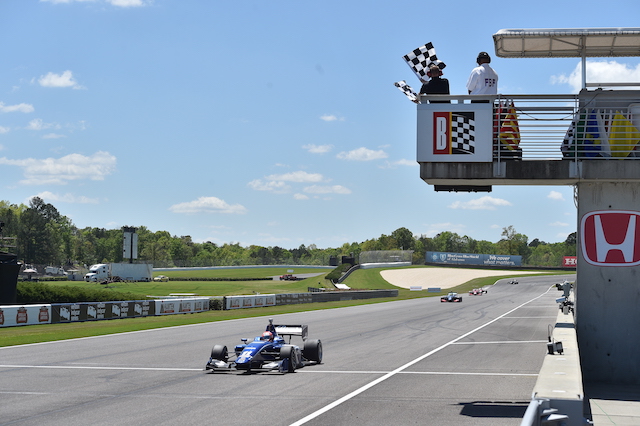 Ed Jones became the fourth different winner from as many Indy Lights races this season in the first encounter at Barber Motorsports Park, as?Felix Serralles came through from 11th to make it a Carlin one-two.

Jones led from start to finish but a series of incidents behind him meant that his team-mate emerged as his toughest challenge.

Dean Stoneman had been due to start second but suffered technical problems on the formation lap.?RC?Enerson?therefore took second when the race did get underway ahead of?Felix Rosenqvist?who climbed from seventh on the grid, but the European Formula 3 champion was soon spun into the gravel at Turn 1 by Pro Mazda champion Santiago Urrutia.

Scott Hargrove?was promoted to third but his attempt to take second from Enerson after the restart ended in contact that put Enerson off track and gave Hargrove a puncture.

That meant Serralles was now up into second, and the Puerto Rican was able to close up to Jones but some wild moments dropped him back again before the end.

Zach Veach recovered from a poor first lap to take third ahead of?Shelby Blackstock, while?Zach?Claman De Melo?came through to fifth from the back of the grid after being excluded from a second place in qualifying for a technical infringement. He gained a place when Juncos team-mate?Kyle Kaiser dropped out with a mechanical issue, putting Serralles into a one-point championship lead.