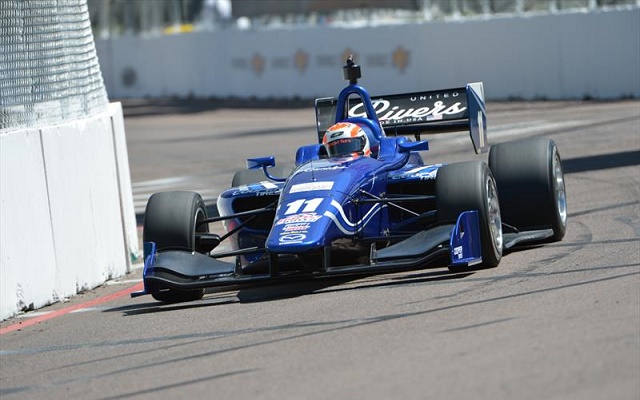 It might’ve been the longest race in the Emirati’s career but, over the distance, there was no matching Jones, as he finished nine seconds in the clear.

The start was eerily similar to that of yesterday’s race, with Jones managing a clean getaway and teammate Max Chilton slipping down the order.

Jack Harvey and Spencer Pigot moved past the Brit, the Juncos driver then going on to shadow last year’s runner-up for second, which allowed Jones to establish an early lead.

But there it was of little consequence as, on lap five, USF2000 graduate RC Enerson ended a difficult Lights debut by pulling off with mechanical issues.

Jones was unfazed by the resulting caution, nailing the restart as the race went back to green. He quickly restored his lead over Harvey, while Pigot lost the leading duo as he found himself fending Chilton off.

The rest of the field, meanwhile, settled into two packs with three drivers close behind Kyle Kaiser in fifth and three more following Juan Piedrahita for ninth.

Matthew Brabham was part of the first pack, having been shuffled down on lap one. He quickly passed Felix Serralles but got stuck behind Scott Hargrove, nearly undoing his progress as he tried to pass the Canadian.

By halfway point, Jones pulled out a second and a half on Harvey, the two running in a league of their own with Pigot a full six seconds adrift.

The Emirati, who admitted to struggling with rear tyre wear yesterday, showed no such signs, doubling his lead within by lap 35.

By that point, Harvey had visibly settled for second, opting to cruise to the checkered flag to ensure a solid points haul.

Kaiser ended up a lonely fifth, while Hargrove kept Brabham at bay, despite going side-by-side with the Andretti driver with five laps to go.

It was seventh for Serralles after his race one retirement, while Piedrahita kept Scott Anderson behind for the entire race distance to claim ninth.