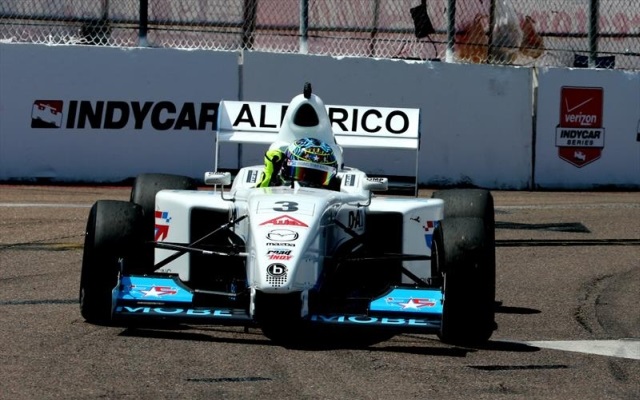 The American sophomore driver yet again converted a pole position to a race victory without giving up his lead to anyone.

On the first lap the race immediately went under caution after a big pile-up accident caused by Patricio O’Ward‘s spin. The young Mexican went sideways, bottling up the track and trapping the cars of Weiron Tan, Florian Latorre, Alessandro Latif, Raoul Owens and Parker Nicklin.?Only the two latter divers managed to rejoin the race.

When the race restarted, Alberico started to confidently build a gap before losing it due to a second caution brought out by expert class driver Bobby Eberle.

The race resumed once again with just one lap to go and it was Alberico who comfrotably took the checkered flag.

Mexican Jose Gutierrez escaped with second, having had to defend from the charging Daniel Burkett, the best rookie of the race.

The Canadian had quickly made his way past Santiago Urrutia in the beginning of the race and even managed to briefly steal second from Gutierrez, albeit the Juncos driver retook it moments later.

While Burkett and Urrutia took third and fourth, they were followed by the trio of Kyle Connery, Garrett Grist and Dalton Kellett, who all benefited from the big incident at the start.

Will Owen and expert class winner Jay Horak finished eighth and ninth respectively, while Owens rounded the top ten out.