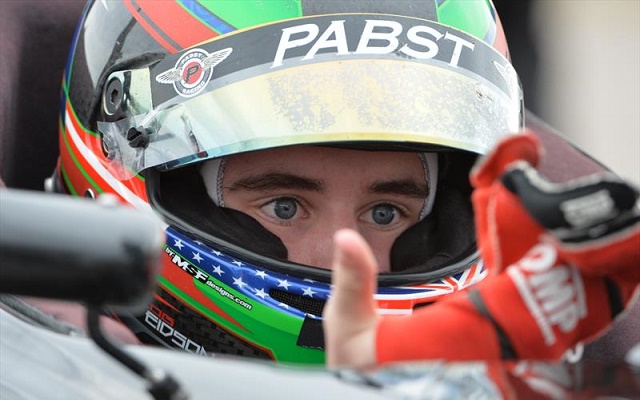 In spite of considerable pressure from Aaron Telitz, Eidson led the race lights-to-flag, picking up sixth win in USF2000 machinery.

It was a clear start for the 16-car field, with Afterburner’s Victor Franzoni moving up two places to fourth during the opening lap, only to slow down and retire with an engine issue.

Telitz, running in second, briefly closed in on Eidson on lap five, but dropped back, allowing the Pabst Racing driver to pull clear.

However, Eidson’s efforts to build a gap were for naught as, a few laps later, Parker Thompson and Garth Rickards made contact, resulting in a heavy shunt into the wall for the latter and a subsequent full-course yellow.

A lengthy clean-up period followed and, when the race got back under green, there were only six minutes left on the clock.

Telitz kept up with Eidson over the restart, but couldn’t try a move as his Cape teammate and Winterfest champion Nico Jamin nearly stole second.

The top three eventually settled back into position but, over the very last laps, Telitz began to reel Eidson back in. With 0.7s between them, the Pabst Racing driver had a brief moment, allowing Telitz to get right on his rear wing, but Eidson held on until the checkered flag.

Third place for Jamin meant an exact repeat of the podium from yesterday’s opener.

John Cummiskey Racing’s Jordan Lloyd ran in fourth for most of the race, but surrendered his spot to teammate Anthony Martin with two laps to go.