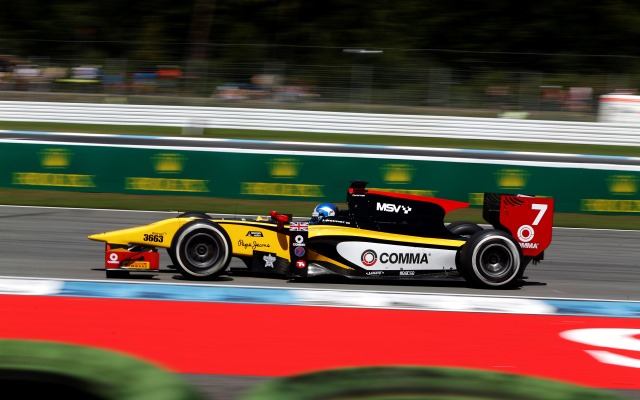 Jolyon Palmer claimed his third pole position from six qualifying sessions in GP2 this year with a dominant performance at Hockenheim.

The championship leader hit the front early on in the session, and led by 0.339 seconds as the field sat in the pits during the middle of the session. Although he did briefly rejoin the action towards the end, his advantage was such that he didn’t need to improve his time and still finished up 0.282s clear. Palmer continues his run of starting every feature race so far this season from the front row.

Stoffel Vandoorne was a late improver to move up to the front row from third, passing practice pace-setter Stefano Coletti.

Tom Dillmann got up to fourth with his final effort at his ‘home’ circuit on his debut for Caterham, relegating Palmer’s title rival Felipe Nasr to the third row by five thousandths of a second.

Arthur Pic claimed a season-best qualifying result of sixth for Campos, just 0.001s faster than Johnny Cecotto. Raffaele Marciello was eighth but could have managed better had he not been baulked twice on fast laps.

The first incident came early in the session when he stumbled upon Rio Haryanto going slowly at the penultimate corner, and the second much later on when Takuya Izawa was dawdling on the racing line at the preceding corner.

Alexander Rossi was fifth at the halfway stage following his switch from Caterham to Campos, but fell to ninth. Simon Trummer completed the top ten.

Silverstone feature race winner Mitch Evans was the highest profile driver to miss out on a top ten berth, only managing 15th.