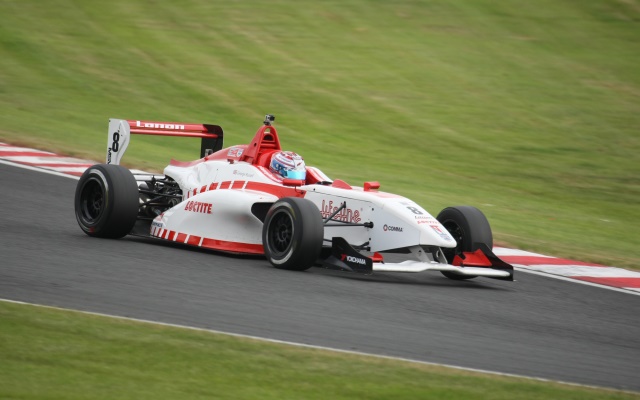 George Russell was untouchable as he claimed a dominant fourth win of the BRDC F4 season in race one at Oulton Park, finishing nine seconds clear of chief rival Raoul Hyman to extend his championship lead.

Starting from pole, Russell was able to quickly open up a comfortable margin as Hyman worried about those behind him, and continued to increase his gap on each lap.

Hyman first came under attack from HHC team-mate Will Palmer, until the double Snetterton winner fell to sixth on lap two when he ran through the Hislop’s chicane.

That put Chris Middlehurst onto the back of Hyman, but the reigning Protyre Formula Renault champion had to settle for third, three tenths of a second behind the South African.

Struan Moore climbed to fourth on lap two past Palmer and Sennan Fielding, and then set the fastest lap as he caught the Hyman-Middlehurst scrap.