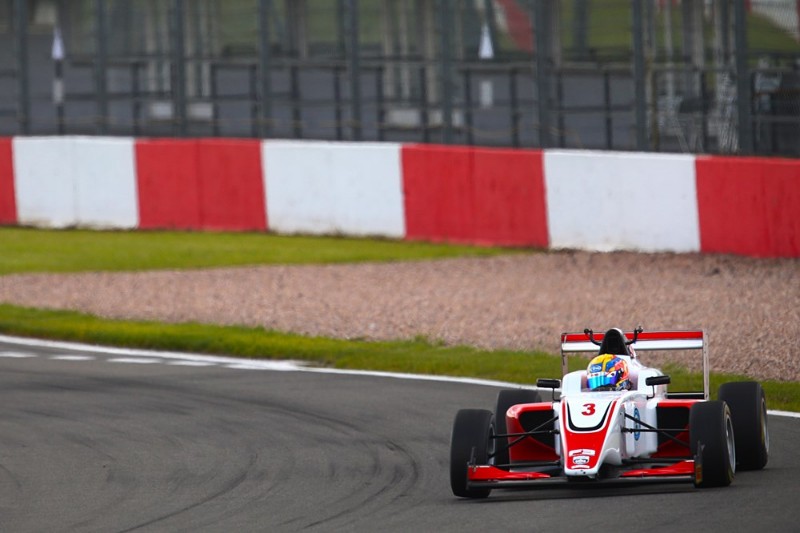 Johnathan Hoggard controlled the opening BRDC British Formula 3 race at Donington Park to take his third win of the season.

Ayrton Simmons tried to keep the pressure on Hoggard after an early safety car, but the Fortec Motorsports driver maintained a gap of just under a second and finished 0.618s ahead of his Chris Dittmann Racing rival.

Simmons made a strong start to pull alongside Kaylen Frederick as they approached the opening corner, but the Carlin driver maintained his starting position. As the pair battled for second, Hoggard was able to escape up the road and build a gap of over a second before Simmons found a way through.

The lead gap was cut entirely on lap three when when Lucas Petersson ran wide into the gravel at the Melbourne Hairpin, bringing out the safety car.

Hoggard couldn?t shake Simmons on the restart, but was able to keep around 0.8s ahead of second until the final lap.

Frederick spent the second half of the race leading a train of drivers as he tried to defend his podium finish. Despite pressure from Douglas Motorsport’s Kiern Jewiss and championship leader Clement Novalak, Frederick held position to take his second consecutive podium finish.

Fifth place for Carlin driver Novalak means Hoggard has closed the gap at the top to 20 points.

Pavan Ravishankar starts race two from pole on the reverse grid, as a result of finishing 15th.