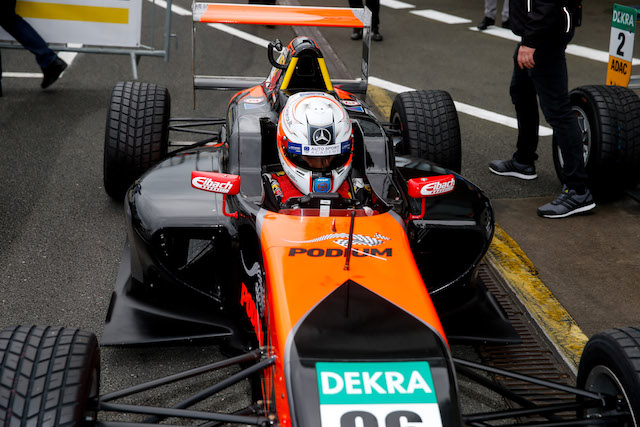 Joey?Mawson has won again during the opening ADAC F4 round at?Oschersleben, despite three safety car periods and even a red flag in race two.

The race started under safety car to check the conditions of the track. However, just as the lights went out on the safety car and Mawson backed the pack up, the concertina effect of the 35 car grid?caught?Louis Gachot unsighted. He plowed into the back of?Yannik Brandt’s Lechner Racing car, causing huge damage to both cars and bringing out the red flag.

After the track was cleared of debris,?the race was shortened to 20 minutes and resumed?under the safety car. Mawson got a great start to distance himself from?Kim-Luis Schram by several car lengths, but further back, Moritz Muller-Crepon misjudged an overtaking?attempt on?Sophia Floersch and slid?into the side of the Motopark?driver, spinning both out at the first corner and bringing out the safety car again.

With only five?minutes left on the clock, the race was restarted. Mick Schumacher had already made use of all the chaos so far to move himself up into fifth, and performed a great overtaking manoeuvre around the outside of turn one to take?Jannes Fittje for fourth position. Rookie winner in race 1 Juri Vips was running in sixth behind Fittje before suffering a front left puncture down the back straight, taking him out of the race.

Mawson went on to easily win the race with a two second gap back to Schramm, with Mike Ortmann defending?aggressively?from Schumacher all the way to the flag to take the final podium position.?Fittje finished fifth ahead of rookie winner?Juan Manuel Correa in sixth, with Simo?Laaksonen and Kami?Laliberte following them home in seventh and eighth respectively. The final points paying positions went to rookies Nicklas?Nielsen in ninth and Felipe?Drugovich in tenth.