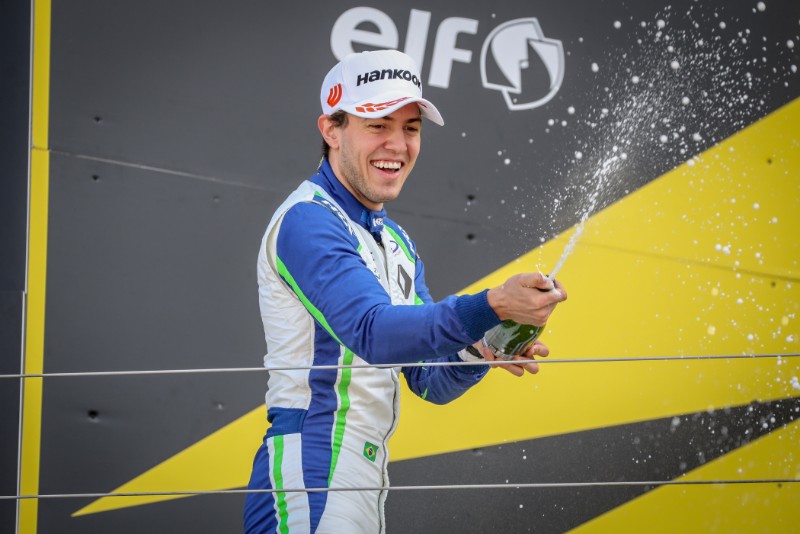 Joao Vieira has revealed he was surprised to be on the Formula Renault Eurocup podium at Silverstone, just three races into his return to racing.

The Brazilian raced in Italian Formula 4 between 2014-’16, with a best result of second place on three occasions. His only win came in the 2014 Italian F4 Winter Trophy.

Having been absent from racing for the last two years, Vieira’s?return in the Regional Formula 3-spec Eurocup with JD Motorsport has already turned heads, not least his second place finish in the first race at Silverstone.

“It feels pretty good [to be on the podium],” said Vieira after taking the unexpected result.

“It was my first time here at Silverstone. We couldn?t test much because Thursday was rain, and Friday also. It feels pretty good to be here right now, and a surprise also.”

When asked if he expected to come back to racing with such a strong start to the season, he replied:

“No, actually. I knew that after so much time off track, it?s pretty hard to come back and be in front. For me it?s a surprise to be here, to be serious.”

The 21-year-old took the podium as a boost of confidence, although couldn’t match the result in the second race and finished 10th. He’s now ninth in the standings, and is behind JD Motorsport team-mates Ugo de Wilde and Leonardo Lorandi after both of them made the podium in the Monza season opener.

Vieira’s race one result also makes him the first Brazilian to make the Eurocup podium since Bruno Bonifacio won at Spa-Francorchamps for Prema in 2014.