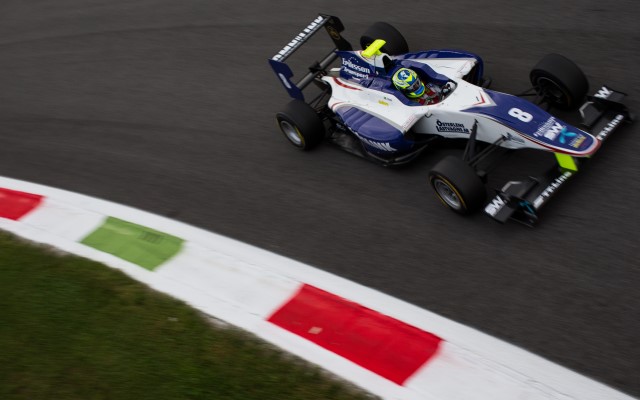 The Swede gradually climbed the leaderboard during the the session, moving up into P3 at the halfway stage and then taking P2 on his next lap – the last of his opening run.

Then when he returned to the track at the end of the session, the Koiranen driver claimed top spot just before the chequered flag.

Dino Zamparelli?followed Eriksson across the line and took second, but was three tenths of a second down, as he scored his best qualifying result to date. Nick Yelloly had taken provisional pole with three minutes left, but was shuffled down to third.

Emil Bernstorff was fourth, while Richie Stanaway took fifth, just beating his title rival Alex Lynn. Points leader Lynn led for much of the session, but couldn’t better his time when it really mattered at the end of the session. He was poised to improve with his very last effort, only to hit yellow flags at the Parabolica after Alex Fontana managed to find the gravel beyond the new tarmac run-off.

Robert Visoiu and Marvin Kirchhofer will share row four, with the Marussia Manor cars of Patrick Kujala and Dean Stoneman rounding out the top ten.