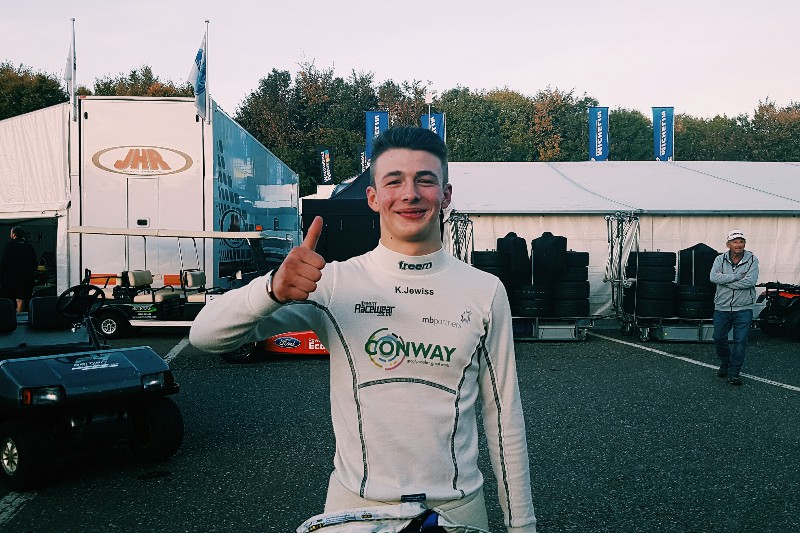 Newly crowned British Formula 4 champion Kiern Jewiss has said that “there’s no more worrying” for the final races now he has secured the title.

The 16-year-old won the 2018 title in the opening race of the season-closing Brands Hatch round, finishing directly behind title rival Ayrton Simmons in sixth.

Jewiss stepped up to British F4 with Double R Racing this season after a single year in Ginetta Junior, where he finished fourth and was the top rookie. He’s won five times this year, and had attracted the attention of Formula 1 teams.

“Pretty bang average start. Didn’t gain, didn’t really lose until the first corner when he got to the outside. In any other race, I would’ve fought a lot harder, but you know what I just let Simmons go,” Jewiss explained to Formula Scout of the race that won him the title.

“I let him have the position and just casually drove around for the rest of the race. I didn’t push, and if I needed to I could’ve. I saw Dennis [Hauger] was quite quick, if he got any closer I would’ve pushed a bit more to Ayrton.

“But as you’ve seen all year, mine and Ayrton’s battles are very hectic. So it was best not to bother even getting involved in one. I didn’t bother to catch him. Just cruised around at this pace. I knew I was quick enough that I wouldn’t get caught in a way that I would have to defend, so I was pretty happy.”

With the title secured, Jewiss is undecided on whether he will change his approach for the remaining two races of the season.

“I don’t know. It depends how I feel in the morning. If I feel I want to push, then we push. If not then we just drive around.

“There’s no more worrying about having to get the podiums, it’s kind of how we feel on the day is how we feel. We’ll see.”