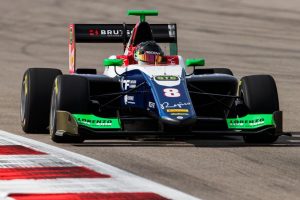 David Beckmann took his third GP3 win in three rounds in the second Sochi race as Anthoine Hubert put one hand on the title.

Arden International driver Joey Mawson started from reversed grid pole, and led all the way through to the final lap, when Beckmann executed a perfectly judged move through the exit of the sweeping Turn 13 lefthander.

Mawson had defended heavily through Turn 1 on the opening lap, with Jake Hughes being forced off at the usually chaotic Turn 2 and resulting in Campos Racing’s Simo Laaksonen and Trident’s Beckmann moving into the podium positions. A lap later Beckmann swept past Laaksonen for second, and spent the rest of the race in Mawson’s mirrors.

The battle for fourth was between title rivals and ART Grand Prix team-mates Anthoine Hubert and Nikita Mazepin, with Mazepin taking the advantage at Turn 2 on the third lap. Hubert kept the pressure on though, and with three laps to go Mazepin understeered at Turn 14 and ended up unable to avoid the barriers. As a result Hubert moved up to fourth, and extended his championship lead by eight points. Mazepin has to outscore Hubert in the opening Abu Dhabi race to keep the title fight going to the final race.

Removal of Mazepin’s car brought about the virtual safety car, during which Beckmann closed significantly onto Mawson, having rarely been in DRS range before then. Racing resumed as they crossed the line for the final lap, which played perfectly into Beckmann’s hands.

Mawson showed his defensive credentials by holding him off through the first DRS zone and the sweeping Turn 4, but was slipstreamed again on the run from Turn 10. Beckmann tucked to the inside and hit the brakes as soon he was in front at the final left hand kink, giving him the lead for Turn 14 despite a huge Mawson lock-up.

Beckmann pulled away in the final few corners, as Mawson held off MP Motorsport’s Richard Verschoor for second, the latter taking his first GP3 podium in his second race.

After the usual opening lap confusion at Turn 2, the positions in the points remained roughly the same. Laaksonen was tapped into a spin by Hubert early on, while Giuliano Alesi collided with Jake Hughes and caused both to drop down the order.

Ryan Tveter came from the back of the grid to finish ninth for Trident, while ART’s Callum Ilott went the other way and finished a lap down, his title hopes now over.