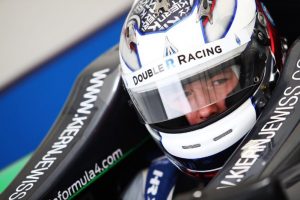 Kiern Jewiss followed his title-winning sixth place in race one with his sixth British Formula 4 win in race two at Brands Hatch.

The Double R Racing driver started the race from pole and had his job made easier at the start when fellow front row man and title rival Ayrton Simmons made a very slow start and dropped to fifth.

Patrik Pasma slotted into second for Arden, with Johnathan Hoggard moving up two spots from fifth on the grid to take third. Jewiss’s team-mate Paavo Tonteri also got involved in the battle for second after a first lap dice with Simmons, allowing the leader to break away.

In the second half of the race he was reeled back in, until Jewiss pushed again and pulled out a gap of 1.993 seconds in the final few laps.

Pasma took his 11th podium of the season in second, while Fortec Motorsports driver Hoggard made it two consecutive podiums without winning, having won on the previous seven occasions he stood on the podium.

Dennis Hauger finished seventh, extending his lead over Arden team-mate Jack Doohan for third in the standings. Doohan still leads the rookie standings by nine points, while Hoggard and Pasma can still beat the Red Bull supported pair to third in the championship.

Manuel Sulaiman finished the race in ninth, benefitting from a time penalty for Lucca Allen.