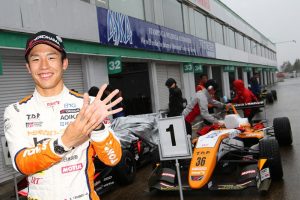 The 23-year-old TOM’S driver topped qualifying to take pole for the first two ‘planned’ races, and narrowly beat team-mate Ritomo Miyata to win the first of those. Although he hadn’t dominated, the additional point for fastest lap meant the title was his with five races to spare.

Ukyo Sasahara finished third for ThreeBond, moving up to third in the standings as a result. His hopes of finishing runner-up in the standings were dashed in the next race when a late rain shower preventing him from breaking another TOM’S 1-2. Toda Racing team-mates Toshiki Oyu and Sena Sakaguchi finished a distant fourth and fifth.

The rain got worse for the third race of the weekend, carried over from Okayama, with a grid formed from the result of race one. It was rather apt that a tsunami was headed to the circuit as several drivers span on the opening lap, and a poor start by Miyata led to him dropping behind Ukyo Sasahara and Yu Kanamaru. Neither was a match for the leader, and the lack of visibility meant Miyata couldn’t easily get past them, leaving Tsuboi to take his 14th win of the season.

He made is 15 wins, and 10 on the trot, in the final race, with the grid coming from the results of race two. Oyu failed to start the race due to damage from race three’s lap one chaos, with engine troubles on the grid preventing National Class champion Jake Parsons from racing.

The ever-present rain didn’t prove a challenge for Tsuboi, who dominated once again. This time Miyata made a mistake-free start, but had no answer to his team-mate, and led home Sasahara. Behind him were Sakaguchi and Kanamaru, forming the trio of drivers who will fight over third in the standings in the final round of the season at Fuji.

Championship debutant Kazuto Kotaka leaped straight to 13th in the standings with a seventh place finish in his first race.