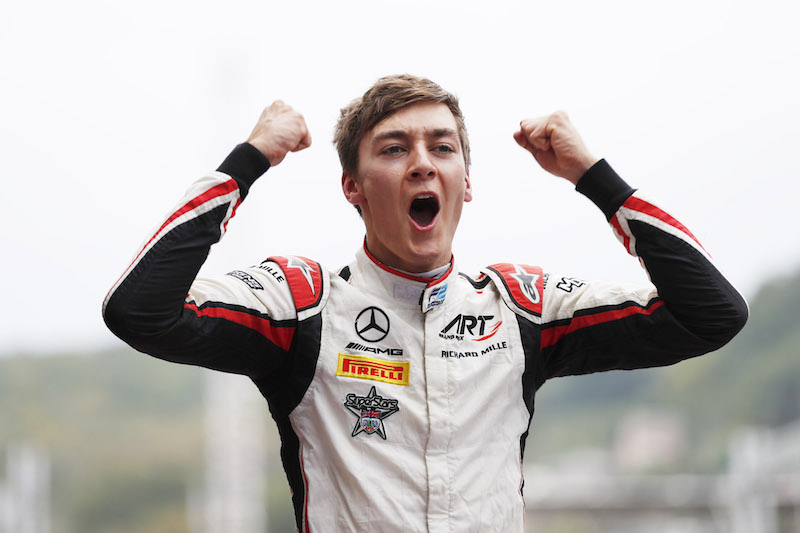 George Russell took another step closer to the Formula 2 title with his sixth win of 2018 in a Sochi Formula 2 sprint race that was hit by rain halfway through.

The points leader was promoted to second early on as Nicholas Latifi was left frustrated by an opening-lap collision with Alessio Lorandi when the Italian hit the rear of the Canadian’s DAMS machine.

Lorandi drove into Latifi braking at Turn 5, with Latifi suffering rear left tyre damage and left rueing a race he “easily could have won.”

Russell then took the lead from pole-sitter Nirei Fukuzumi on lap five of 21 into Turn 2 while using DRS, gapping his former ART GP3 team-mate before extending his lead further as rain began to fall on lap 11.

Following a virtual safety car after Jack Aitken spun and stalled, Russell and the majority of the other drivers pitted to switch to wet tyres.

He avoided pitlane drama to regain the lead from Antonio Fuoco on lap 16 after Charouz kept he and Louis Deletraz on track on slicks.

Russell finished 7.4 seconds ahead of Sergio Sette Camara, who held off Alexander Albon by 0.8s, with the 2019 Nissan e.dams FE driver attacking with DRS on the final lap.

Having set the fastest lap of the race after passing Fukuzumi, ART Grand Prix driver Russell is now 37 points ahead of Albon with 48 left up for grabs in the final round in Abu Dhabi.

Lando Norris’ chances of winning the title are over after a torrid race.

From the back of the grid after his feature race retirement, Norris was up to 12th when he was handed a stop-go penalty for being out of position on the formation lap – arriving at the grid behind Luca Ghiotto before lining up back in his original grid position ahead of the Campos driver.

Norris took the early decision to pit for wet tyres under the virtual safety car, but retired soon afterwards when he picked up a puncture while battling with Arjun Maini.

Artem Markelov produced a double pass on Fuoco and Nyck de Vries through Turns 3 and 4 in the early stages, but de Vries came back for fourth on the penultimate lap as the Russian visibly suffered tyre wear to his rear-left tyre that had lost grooves on the outside.

Roberto Merhi had missed out on reversed-grid pole after receiving a five-second time penalty at the end of the feature race, but moved through to sixth.

Fukuzumi ended in seventh ahead of Dorian Boccolacci, who passed Fuoco for the final point late on despite the track drying.

Jack Aitken did not finish after stopping in the middle of the track after a Turn 8 spin when the rain started falling, while Niko Kari suffered his second retirement of the weekend when he hit the wall and suffered major front wing damage through the same section.