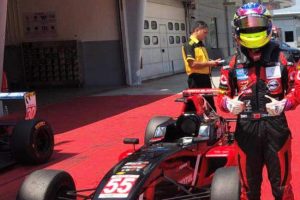 BlackArts Racing’s Daniel Cao won the 2018 Asian Formula Renault title with a race to spare at Sepang, his second championship triumph of the year.

Cao won the 2017-18 Formula 4 South East Asia crown back in April, after stints in the British and Chinese series, and was a winner on his AFR debut last year with the rival Asia Racing Team.

?There have been many ups and downs this season. From the beginning of the season in Zhuhai, to this last AFR weekend, I have learned a lot about racing and racecraft,” Cao told Formula Scout.

“I am especially happy about winning the 2018 title with my victories this weekend. In six rounds and twelves races, I had six wins.?Tomorrow is China?s National Day, and I am really happy to offer this special gift of a championship to our country!

“Thanks to my sponsors, my parents, and especially my race engineer and coach from BlackArts Racing Team, and, of course my race car, which served me so well this season.?

It was Spanish team-mate Antolin Gonzalez who started the season with victory at Zhuhai, with Cao finishing third from fifth on the grid. In the second race things went downhill, as the pair collided while fighting for second and failed to finish.

Cao upped his game for the second round of the season at Shanghai, taking the championship lead with two wins, two poles and a fastest lap. Reigning champion Charles Leong returned for the third round of the season at Ningbo with Asia Racing Team, but torrential rain in the opening race caught out several drivers and led to a surprise victory for S&D Motorsports’ Luo Kai Luo.

Leong was able to prove his class in the dry second race, winning by over 13 seconds ahead of Minang and Cao. The second trip to Zhuhai was also Leong-dominated, with the Macanese driver signing off his time in the championship with another two wins. Cao made another podium appearance, enough to keep him five points clear of Minang.

The final two rounds took place at Sepang, where Cao won his F4 SEA title, and the Chinese driver was simply unbeatable. He took pole, win and fastest lap both times in August, then almost did the same again this weekend. He won the title with another dominant performance in the first race, then was beaten to race two pole and fastest lap by Gonzalez, who also looked set to win until a last lap pass by Cao.

Two podiums was enough for Gonzalez to beat Luo to second in the standings, while BlackArts won the teams’ title on the first Sepang trip.