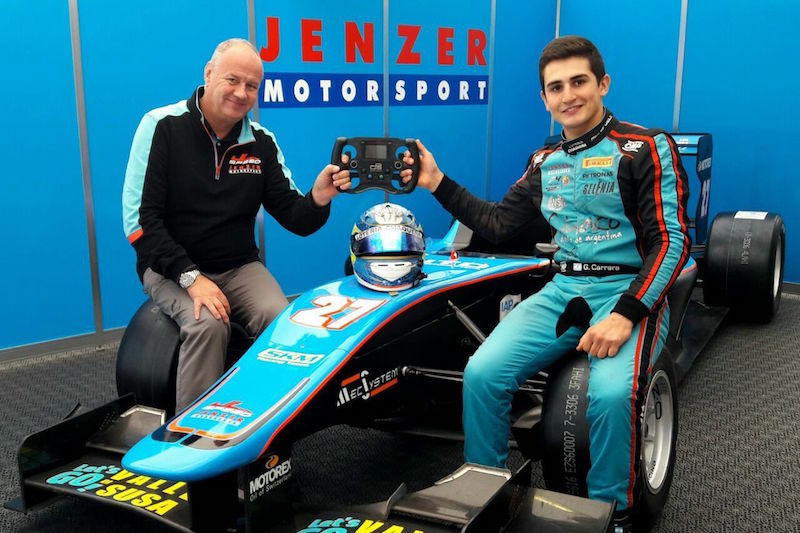 The FIA F3 field was reduced from 30 cars to 29 at Paul Ricard last weekend after Artem Petrov encountered budget issues and Jenzer left his car vacant.

Argentine driver Carrara has announced that he will race for the team in Austria in what is currently a one-off with a view to stepping up on a full-time basis in 2020.

Carrara, 18, is currently contesting his third season in F4 with the Jenzer squad.

Last year he progressed from 15th to seventh in the Italian championship, taking three podium finishes along the way, but is only 18th after the opening two rounds of the 2019 campaign. He did however win all three races in a Spanish F4 appearance at Paul Ricard in April.

“While we had tried to step up to Jenzer’s F3 at Paul Ricard, events happened so fast that there was not enough time to achieve it in France,” said Carrara, who has tested a previous-generation GP3 car run by Jenzer.

“We’re going to face the weekend with the mindset to collect as much experience as possible, finish the two races and take the first step towards the goal we have for 2020, which is to enter this category.”

Carrara is managed by former driver Luciano Crespi, who has worked closely with Jenzer to create opportunities for Argentine drivers, including with Marcos Siebert who beat Mick Schumacher to the Italian F4 title with the team in 2016.

“It will be only this race, so Giorgio will have to make the most of it to gather experience,” said Crespi.

“Luckily he has already driven the Red Bull Ring with a GP3 car, so it will not be so difficult to adapt to the power and speed of the car. “