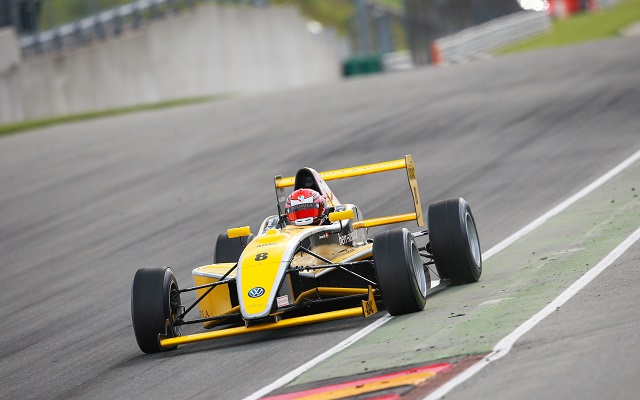 ADAC Formel Masters championship leader Mikkel Jensen put himself in prime position to seal the drivers’ crown early with a victory in race one at Sachsenring.

The Dane led from lights to flag in the 25-minute race and comfortably took the checkered flag to record his eighth win of the season.

Fellow front row starter Joel Eriksson put pressure on Jensen early on in the race but had a brief trap through the gravel, which cost him valuable time. He ended up taking it easy for the rest of the race and finished second, 4.8s behind Jensen.

The championship leader’s rookie teammate Tim Zimmermann made it two Neuhauser cars on the podium, driving a calm race to take third.

JBR’s Igor Walilko was involved in a turn one incident with Lotus driver Dennis Marschall, which put the German out of the race, yet the Pole managed a solid drive afterwards, taking the flag in fourth – his best result of the season.

Jensen’s chief title rival Maximilian Gunther fought his way up to eighth on the grid to fifth, finishing right ahead of Fabian Schiller and Kim-Luis Schramm.

The victory sees Jensen go to 297 points in the standings to Gunther’s 211. The Dane will be crowned champion in race two, which he starts from pole, if he doesn’t drop six points or more to Gunther.