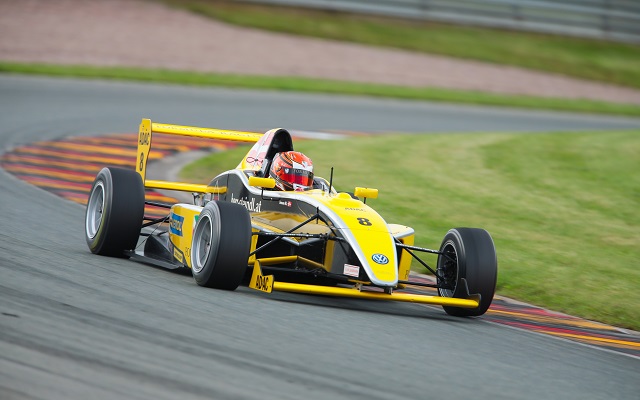 ADAC Formel Masters championship leader Mikkel Jensen took his third straight double pole in qualifying for the penultimate round of the season at Sachsenring.

The Dane narrowly edged out Lotus youngster Joel Eriksson on both best and second-best times to claim poles for a weekend which could see Jensen clinch the ADAC Formel Masters title.

Eriksson, in what was a season-best qualifying performance, led much of the session and managed a streak of good laps in the final minutes, but had to ultimately settle for second.

His teammate and fellow rookie Dennis Marschall wasn’t far off in third ahead of Jensen’s Neuhauser squadmate Tim Zimmermann.

JBR’s Igor Walilko produced a personal best qualifying performance to pick up fifth, ahead of another Lotus driver Ralph Boschung and Fabian Schiller of Schiller Motorsport.

Mucke Motorsport had a difficult qualifying session as its top man Maximilian Gunther could only take eighth whilst fellow title challenger Marvin Dienst settled for tenth – with Nico Menzel slotting in between the two.

The grid based on second-best laps sees just two changes from the overall qualifying order – Schiller starts sixth ahead of Boschung, while Dienst takes ninth in front of Menzel.