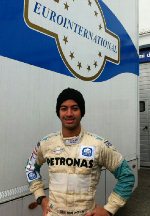 Nabil Jeffri has confirmed he will race in German F3 with the Eurointernational team this year.

“Done with signing all the agreement with Euro International,” the Malaysian said on Twitter. “Confirmed doing German F3 this year.”

Jeffri will be finally switching to Europe after three years of racing in Asia. Jeffri has started his single-seater career in 2010, during the final year of Formula BMW. Being the second-best Malaysian driver in the category that year, he finished in fifth position overall.

When the series was renamed to JK Racing Asia Series, he won the first race of the championship in 2011 and finished third overall. Last year the 19-year-old driver started the year in amazing shape , but in the final five races (all of them in India) he failed to win once, allowing the South-African rookie?Aston Hare?to beat him.

Jeffri will cooperate with the Italian-based EuroInternational team, led by Antonio Ferrari,?after racing for them in 2012 and previously testing with their F3 team on numerous occasions. Hare is expected to join him in the German F3 squad having partnered Jeffri at a test at Misano earlier this week.

Vandoorne dominates a rainy day one of FR3.5 testing at Aragon

Akash Nandy will stay in Formula Masters China for 2013