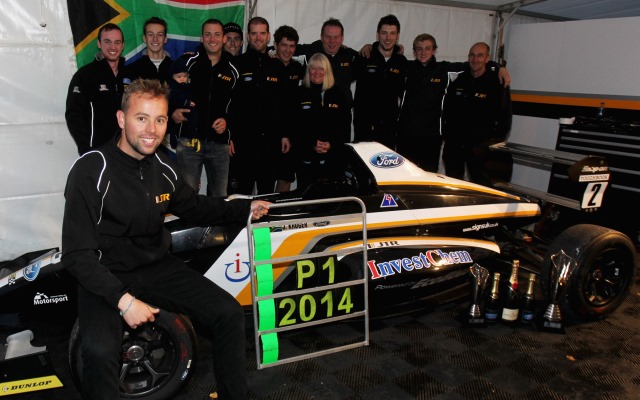 Jayde Kruger has been confirmed as the 2014 Formula Ford GB champion after an appeal from a rival was dismissed.

The South African driver had only won the title provisionally after a controversial incident with Harrison Scott in the penultimate race of the season.

The pair had been tied on points going into the final round at Brands Hatch last month, and Scott had opened up a lead after winning the weekend’s first race. But the duo then clashed in the second race, with Scott retiring on the spot and Kruger winning.

After the race, the Clerk of the Course charged Kruger with causing an avoidable collision and he lost his points from that race, but his JTR team appealed that decision to the stewards of the meeting, who agreed that it was a racing incident.

Scott’s Falcon Motorsport squad appealed that ruling to the national court of the MSA, the United Kingdom motorsport governing body, but this appeal was rejected yesterday (Tuesday), with the court supporting the stewards’ decision.

This means that Kruger keeps his win in round 29, and is therefore confirmed as champion by six points over Scott.

Kruger is the final winner of the series before it becomes MSA Formula next year, moving to the FIA’s Formula 4 rules.

Palmer and Goddard to test for Force India in Abu Dhabi