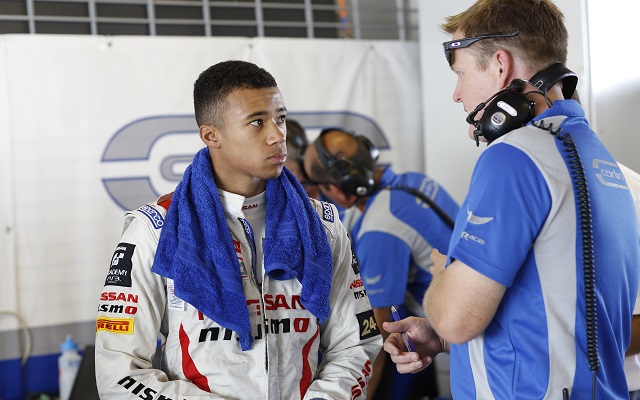 Jann Mardenborough will test for Carlin in this week’s first GP3 pre-season test in Estoril.

The British driver, who will race Nissan’s new LMP1 challenger this year, competed in the series for Arden last year, finishing ninth in the standings and winning the reverse grid race at Hockenheim.

He has previous experience with Carlin, having contested his maiden season of single-seaters in 2013 in F3 with the team, and made his GP3 testing debut with the squad in Abu Dhabi at the end of the same year, before joining Arden.

Joining Antonio Fuoco and Mitch Gilbert at Carlin, Mardenborough is the only addition to the entry list for the first test. 22 of the other 23 available seats have already had drivers confirmed for the season, while series newcomers Campos will only run their two signed drivers in this test.

The series has revealed that only eight teams will compete this season, reducing the maximum number of entries from 27 to 24.

Marussia Manor Racing withdrew towards the end of last season amidst the financial issues surrounding the parent Formula 1 team, but series boss Bruno Michel explained that another team could not be welcomed in their place for this year.

?In spite of the numerous requests from teams to join the GP3 field and from drivers who wish to race in our series, we were unable to give a new entry for this season in order to replace Marussia Manor Racing as their cars remain in administration,” he said.

?I could not ask for a new team to buy three brand new GP3/13 cars when we will introduce a new machine next year. Therefore, there will only be eight teams competing in the 2015 GP3 Series season. However, we will of course give an entry to nine squads for the next three-year cycle which will start in 2016 in order to meet the demand of both teams and drivers.

?Looking at this season?s line up, I am very impressed by its level. It is one of the strongest we have had in GP3 and I cannot wait to see who will come out on top.?

*Testing in Estoril, not confirmed to race