Jamin holds on to win under heavy rain in Toronto 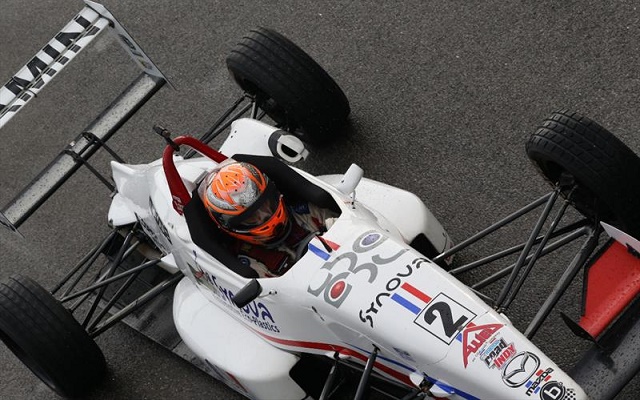 The Frenchman led all 15 laps of the shortened race from pole, but came close to exiting the race after brushing the wall in the final minutes.

The caution was out after just two laps of running as Keyvan Andres Soori was off, completing a weekend of two retirements.

Jamin and title rival Jake Eidson pulled away at the restart, while Anthony Martin swapped places with Aaron Telitz, only to be ordered to let him through as he was adjudged to jump the start.

Pushing hard, Martin then went straight-on in turn three but only lost one spot – to Luke Gabin – before he rejoined.

And when Telitz went into the tyre barrier in the very same corner, Gabin was there to capitalise, moving up to third, which would eventually become Team Pelfrey’s first podium of the campaign.

Out front, Jamin led Eidson by two seconds, but hit the wall with his left-side tyres at a relatively high speed. His suspension, however, seemed undamaged and it would have no effect on his pace as Parker Thompson hit the wall to bring out a caution.

The cars cruised behind the safety car, which actually had to stop in the runoff at one point for emergency repairs, before the officials decided to call the race on the account of the track conditions being unsafe.

As such, Jamin won ahead of Eidson and Gabin, with Martin and a recovering Telitz completing the top five.

Garth Rickards was sixth, ahead of Yufeng Luo and Nikita Lastochkin, who himself survived contact with the wall.