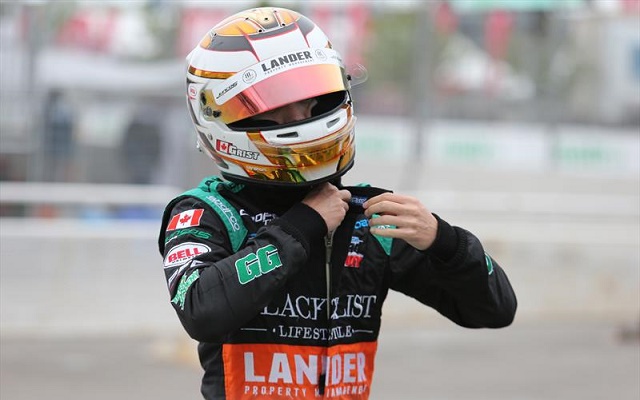 Grist, whose last win came in 2014 at Mid-Ohio, survived the challenging conditions to convert pole into a victory.

The Ontario native endured a difficult opening lap, barely keeping Florian Latorre at bay over the first few corners before finally allowing him through into turn eight.

The caution came out just then, with two separate incidents within the field. First, Expert class driver Bobby Eberle spun, but got going again. At the same time, Neil Alberico went off in T2, hitting the wall with the right front tyre and wrecking the suspension.

Under caution, M1 Racing’s Victor Franzoni then spun out, destroying his left rear. And, as the field geared up to go back under green, race leader Latorre lost control getting on the throttle out of turn ten.

The restart was seemingly flagged off, only to take place a lap later, where Grist stormed off from Weiron Tan.

The top two positions were virtually secured, but there was a late change for third as Timothe Buret went off in T3 and allowed Patricio O’Ward through.

As the track was drying, Latorre, two laps down, returned on-track on slicks. With three minutes to go, him and Alessandro Latif made contact, both ending up in the wall.

The race was called after that, handing Grist the win ahead of Tan and O’Ward.

Points leader Santiago Urrutia increased his advantage with fourth, ahead of Jose Gutierrez.

Raoul Owens and a recovering Buret both passed Will Owen for sixth and seventh, with Daniel Burkett and Kyle Connery rounding out the top ten.

Jamin holds on to win under heavy rain in Toronto