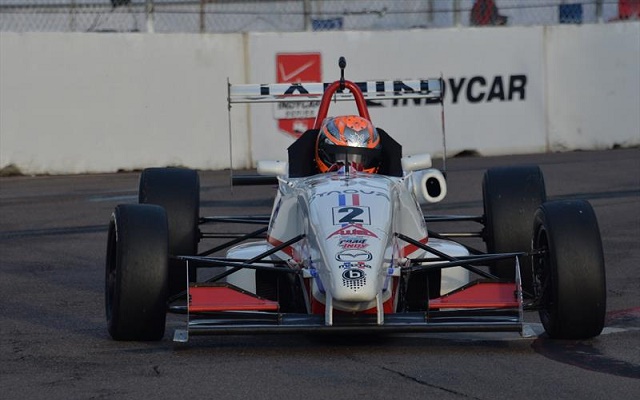 USF2000 Winterfest champion Nico Jamin led a Cape 1-2 in the first race of the second round of USF2000 at NOLA.

With the start delayed due to track cleanup, the race was shortened to 18 minutes from the originally planned 30 due for scheduling reasons.

Taking the green flag, Jamin held the lead off pole, while teammate Aaron Telitz found himself under huge pressure from championship leader Jake Eidson, who was narrowly kept behind.

The fight between the two Americans allowed Jamin to establish a 2.5s lead after four laps and saw Victor Franzoni, who had passed Jordan Lloyd for fourth, close in on a podium spot.

But the field spread out as the timer approached zero and Jamin coasted to his first victory in the regular USF2000 series.

American duo of Telitz and Eidson made up the podium, with Franzoni taking fourth ahead of Lloyd.

Keyvan Andres Soori managed a repeat of his best USF2000 finish with sixth, ahead of Parker Thompson.

Anthony Martin, who dropped down from fourth on the grid, was battling Yufeng Luo and Garth Rickards for eighth and there was contact on the final lap, leading to all three being relegated out of the top ten.

As such, Team Pelfrey’s Luke Gabin snuck by in eighth, while his squadmates Ayla Agren and Nikita Lastochkin completed the top ten.

While the cars battled on-track, the loudspeakers sounded several weather warnings, but the track stayed dry enough to allow for a solid race pace.

Telitz’s fastest lap means he is set to start the second race from pole.