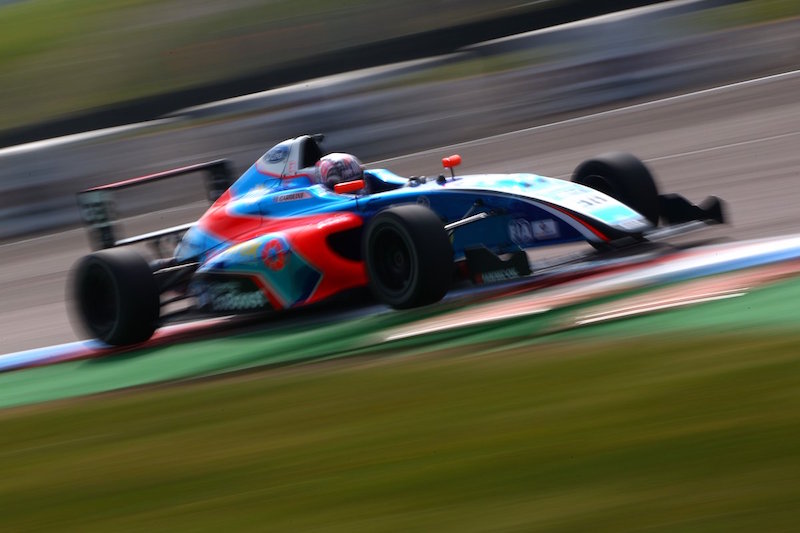 Jamie Caroline became the first driver to win all three races in a British Formula 4 round with a commanding performance in the last?encounter of the weekend at Thruxton.

The Carlin driver started third on the grid, jumped ahead of Oliver York for second off the line and then dived inside Alex Quinn into the Complex to take the lead in a similar move to that he made at the start of race two.

Caroline then?quickly broke the tow to the cars behind and pulled away with a series of fastest laps, and although he got a black-and-white warning flag for exceeding track limits exiting the final chicane, he continued to stretch his advantage to 5.5 seconds.

The 18-year-old said long-time friend and competitor Billy Monger, who returned home from hospital on Sunday after his life-changing accident?at Donington, had “told him” to win all three races at Thruxton, and that he would be visiting him at home in the evening.

Carlin team-mate Logan Sargeant scored his maiden British F4 podium in second, capitalising when Quinn and York banged wheels at Club on the second lap and both went off track.

Qualifying pace-setter York rounded out the podium after eventually finding a way past Quinn, who soon spun on the kerb at Club as Linus Lundqvist tried to go around the outside of both himself and Piastri.

Lundqvist challenged Piastri on the outside line at the same point with five minutes on the clock but locked up and ran deep, but the Swede finally made a success of the move on the penultimate tour to finish fourth.

Karl Massaad was briefly on course for a second podium finish of the day after finding a way past York, but having been re-passed by both the Fortec driver and Piastri he had a Club moment of his own. The Lebanese did however clear Piastri once more on the final lap for fifth.