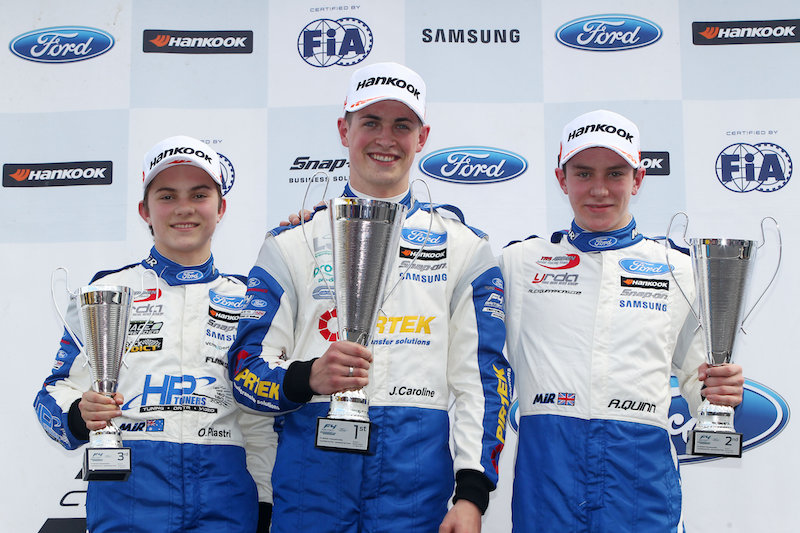 Tenth last season, Caroline is the only driver from last year’s top 10 with a drive confirmed for the full 2017 season, having joined Carlin after?stints with Jamun and Fortec made up a disjointed?rookie campaign.

Caroline gradually opened up a 1.7-second margin over Quinn early on, and created another healthy gap after losing it to a safety car intervention, but Quinn then reduced this margin again over the second half of the race, and finished just 0.29s behind.

In race three it was Quinn’s rookie Australian team-mate Oscar Piastri taking the fight to Caroline after finishing a close third in the opener from a front-row start.

Caroline again took victory though, this time by 1.6s, with Quinn this time hot on Piastri’s tail throughout the closing stages.

Another Arden driver Ayrton Simmons took a maiden victory in race two from pole on the reverse grid. He was 4.9s ahead of Carlin debutant Patrik Pasma, with Billy Monger completing the podium ahead of Logan Sargeant.

Caroline got ahead of Piastri and Quinn to finish fifth.

Sargeant also finished fourth in race one ahead of Pasma, Monger and Simmons, while it was Pasma heading Simmons, Sargeant and then Monger in race three.