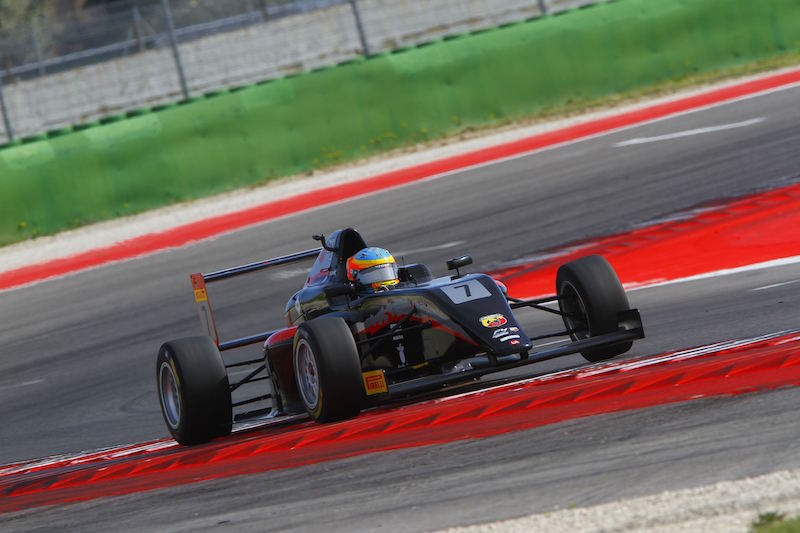 Sebastian Fernandez won all three races in the opening round of the Italian Formula 4 season at Misano.

Driving for BhaiTech this year after his maiden win with?Mucke Motorsport at the 2016 season finale at Monza, the Venezuelan pipped team-mate Lorenzo Colombo by half a tenth in qualifying.

His challenge in the first race however came from eighth-place starter Artem Petrov, who climbed to third on lap two and then got by Prema’s Juri Vips – who started sixth – on lap five.

By this point, Fernandez led by nearly three seconds, but Petrov began closing that gap prior to a late safety car period after Juan Correa spectacularly rolled his Prema-run car after contact with Kush Maini as they fought with Felipe Drugovich over sixth.

There were two laps of racing after the restart, with Fernandez holding on to win by just under half a second over Petrov with Vips completing the podium.

Colombo finished fourth after being swamped through the opening turns, in front of Ferrari protege and lead?F4 debutant Marcus Armstrong.

In race two, Colombo provided Fernandez with a race-long challenge, with 0.765s separating them at the flag.

Fernandez started third for race three, but with Colombo bogging down from pole, he went side-by-side through the opening turns with second-place starter Vips.

Vips was tagged from behind by the remaining BhaiTech car of car racing newcomer Leonardo Lorandi at both turns one and two, with the first impact removing?Lorandi’s front wing and the second sending Vips spinning into retirement as Fernandez claimed the lead on the inside.

Fernandez kept Drugovich at bay for the win, while a five-second penalty for abusing track limits dropped the Brazilian to fourth and promoted Colombo to second in front of Petrov.

Armstrong was on course for another podium before late clashes defending from?Colombo and then Maini. Fellow Ferrari recruit Enzo Fittipaldi instead picked up his best result of the weekend in fifth, having qualified fourth for the first two races.