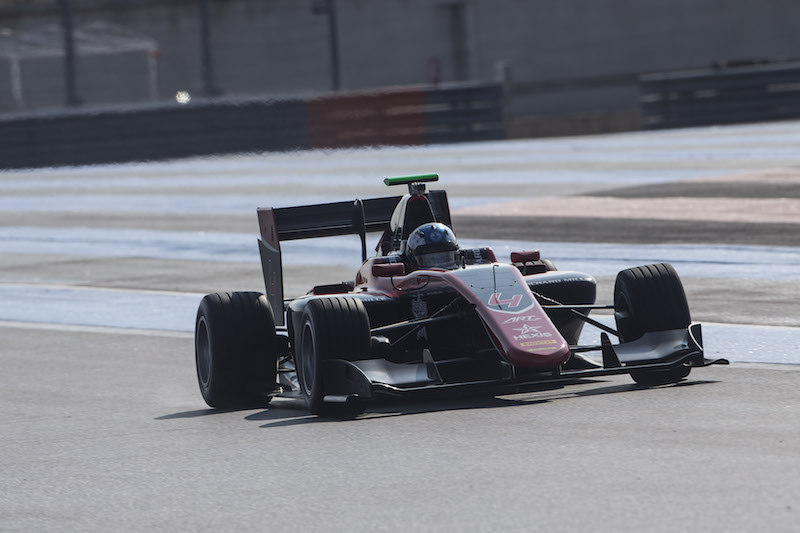 As was the case at last week’s Formula 2 shakedown at Magny-Cours, the day began with snowy conditions, but things improved over the morning session, which ART’s Anthoine Hubert topped with a time of 1m59.549s.

Times were lowered by 10 seconds in the afternoon as the track dried, with Hughes setting the best time of 1m49.456s inside the final 20 minutes of running.

Hughes, returning to GP3 this year after a season in Formula 3,?displaced rookie team-mate Nikita Mazepin – who next Monday will be first to drive the new Force India Formula 1 car at Barcelona – by just over a tenth of a second.

After topping the Abu Dhabi test in December on MP Motorsport’s first appearance in GP3, Niko Kari ended the day third for the Dutch outfit.

Leonardo Pulcini, who has reunited with his Euroformula Open title-winning team Campos Racing for his second season in GP3, was fourth in front of a trio of Frenchmen: Hubert, Kari’s new team-mate Dorian Boccolacci and Arden’s Formula Renault graduate Gabriel Aubry.

Three Trident drivers completed the top 10, with Alessio Lorandi heading Ryan Tveter and Pedro Piquet, who is still to be confirmed as racing for the team this season.

After being announced as an Arden driver at the start of the morning, Joey Mawson enjoyed a competitive showing on his first day driving a GP3 car, finishing up 11th having sat third with an hour remaining.

Ferrari junior Callum Ilott had a quiet day in the fourth ART car, finishing up last of the 20 drivers in the afternoon and 18th in the morning, completing only 27 laps compared to Hughes’ 57.