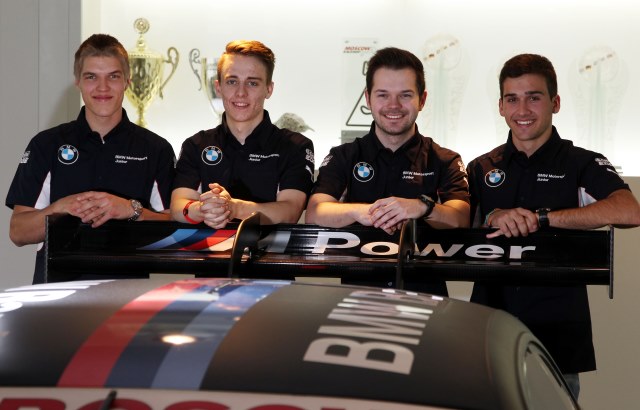 The initiative is new for 2014 from the German manufacturer, with the aim of developing young drivers for its touring car and GT programmes.

Hughes is one of four drivers taking part in the programme this year.

?Nowadays, there are hardly any major manufacturers willing to train young racing drivers without them having to pay,? said the 19-year-old Englishman, who is competing in Formula Renault 2.0 NEC this season.

?The fact that BMW is offering us this opportunity based on talent alone is fantastic. I have not done many laps in a touring car yet, so I am sure I will learn an awful lot on this programme.?

Also joining the programme are 23-year-old Finn Jesse Krohn, who was a triple Formula Renault champion in Northern Europe in 2008 and has more recently concentrated on GTs, and 19-year-old Spaniard Moises Soriano, who contested his only season of car racing in 2012 in the F3 Open, finishing second in the Copa class.

Hughes, Krohn and Soirano join German driver Alexander Mies, who was named as part of the programme when it was unveiled in March.

?I am delighted to welcome the first group on our new programme for young GT and touring car drivers into the BMW family,? said BMW Motorsport Director Jens Marquardt. ?Our four drivers came through against numerous other hopefuls, which shows we think a lot of their talent and are expecting big things from them. I am looking forward to seeing them on the racetrack together for the first time in the near future.?

The quartet will drive a Formula BMW at Oschersleben later this month and will also compete in three races at the wheel of a BMW M235i Racing in the VLN Endurance Championship on the Nurburgring Nordschleife.