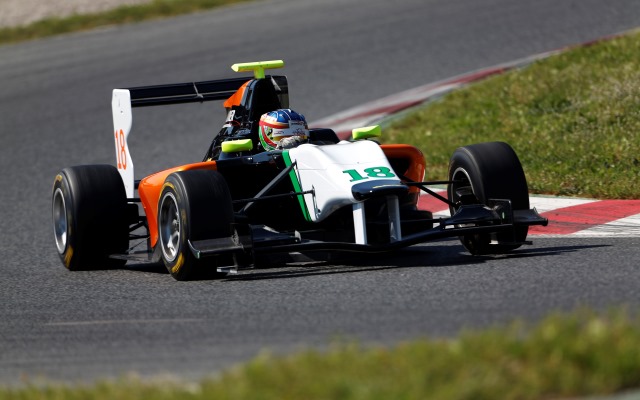 Nelson Mason and Beitske Visser will race for Hilmer Motorsport in the team’s debut in the GP3 Series in Barcelona this weekend.

He first tested in GP3 with Trident in Estoril in March before joining Hilmer when they joined the field for the other two tests in Jerez and Barcelona.

The team has confirmed that Mason will contest the full season.

?I am extremely happy to be part of Hilmer Motorsport and to compete with the team in GP3 Series this year,” said Mason. “I would like to thank the whole team for offering me this opportunity and all the work at the pre-season test days in Jerez and Barcelona.

“It is a tremendous honour to join the team in the GP3 Series, and I hope to uphold the success that the team has achieved so far in GP2. I?d really like to thank my family and supporters for all the tireless work to get me here and everyone behind the scenes.?

Visser is already racing in Formula Renault 3.5 this year for AVF, having previously spent two years in ADAC Formel Masters and taken three race wins. She was part of the Red Bull Junior Team in 2013.

The 19-year-old Dutch driver will sample a GP3 car for the first time in free practice on Friday. At present, she is only doing the opening round for Hilmer.

?I am very happy to get the opportunity to do this race with Hilmer Motorsport in GP3 Series and I want to thank the team to make this happen,” said Visser. “It is going to be a lot of hard work because it is the first time for me with this car and tyres, but I know the track in Barcelona very well. I can?t wait to get out on track on Friday.?

Hilmer are new entrants to GP3 this year, taking the entry vacated by the collapse of Russian Time’s planned expansion into the category. Mason and Visser join the previously-announced Ivan Taranov at the outfit, which carries Force India backing.

The two additions complete a capacity 27-car entry for the opening round of the season.