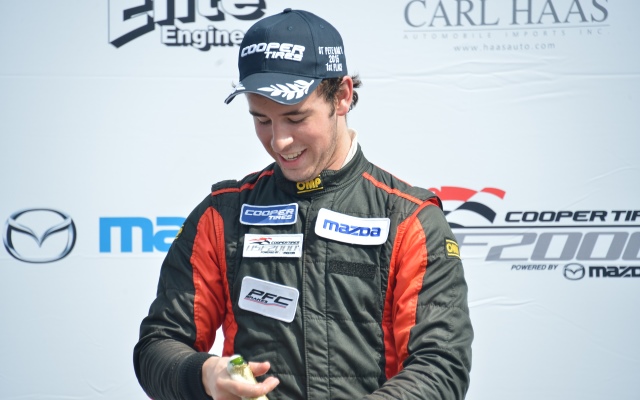 USF2000 runner-up Jake Eidson will step up to Pro Mazda this year by returning to the Cape Motorsports with Wayne Taylor Racing fold.

For 2015 he switched to Pabst Racing and went up against Cape drivers Nico Jamin and Aaron Telitz for the championship, scoring four wins and ending up second.

In Pro Mazda he’ll team-up with rival Jamin at Cape. Telitz has signed with Pelfrey for his graduation.

“After finishing second in last year?s USF2000 championship, we weren’t sure if moving up to Pro Mazda was possible.

“When the season was over, we tested with the Capes and quickly knew that they have a winning team. Fortunately, we were able to make the 2016 season achievable.

“I know that my goal, as well as the team’s goal, is to aim for the top spot in the Pro Mazda championship and I have a lot of confidence in their ability to make it happen. This is a dream come true and I can’t wait to get started.”

Team owners Dominic and Nicholas Cape said in a statement: ?We?re really excited to have Jake back as part of our 2016 Pro Mazda campaign.

“He won a championship with us in 2013, and in 2014 he had a great rookie season finishing third in USF2000, and to be honest, it was really hard racing against Jake last season.

“For our team to secure the top two 2015 USF2000 Championship finishers really forms a strong lineup for our Pro Mazda squad in 2016.?