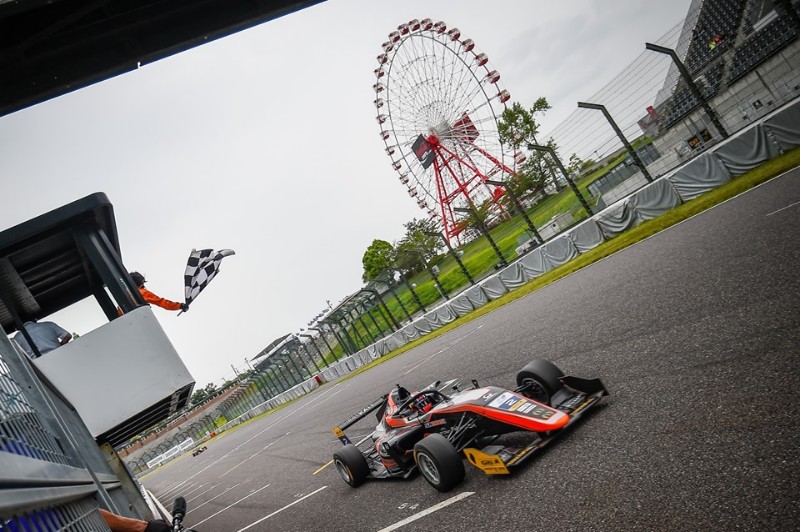 Jack Doohan closed to within nine points of championship leader Ukyo Sasahara after the Hitech GP pair continued their Asian Formula 3 domination at the third round at Suzuka.

Doohan took victory in race one after moving ahead of poleman Sasahara into the first corner before a lengthy safety car period, due to a start line collision when Takashi Hata ran into stalled Super License team-mate Tomoki Takahashi.

The Australian held on by 0.611 seconds from Sasahara after the race resumed with ten minutes remaining, with Hitech taking its seventh straight one-two finish of the season.

Doohan had looked set to win again in race two after leading from pole position, but his car ground to a halt in the closing stages during a safety car period, handing Sasahara victory.

Amends were made in race three as Doohan came from fourth on the grid to take the win, benefiting from a drive-through penalty for Sasahara – who spun around poleman Petr Ptacek of Seven GP at the chicane on the first lap. It left Sasahara ninth in the classification.

Daniel Cao, who came into the weekend third in the standings, took second behind Sashara in race two for Absolute Racing, having finished fourth in the first race, but failed to finish race three.

BlackArts Racing?s Brendon Leitch bounced back from a non-finish in the second race to score his best result this season with second in race three – storming through the field from tenth on the grid – finishing ahead of maiden podium finisher Jordan Dempsey for Pinnacle Motorsport.

Formula Renault Eurocup podium-finisher Ptacek was another driver to make their Asian F3 debut. The Czech racer took third in race one behind Doohan and Sasahara and just missed out on another podium in the second race, finishing fourth behind Walls.

W Series driver Miki Koyama scored a pair of seventh place finishes in her second Asian F3 appearance, having switched to BlackArts Racing for the Suzuka round.