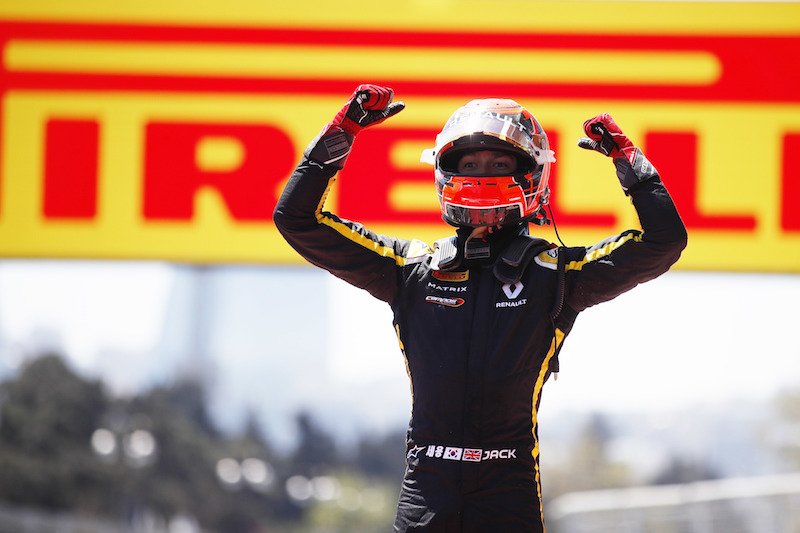 Aitken ? who previously won the Barcelona sprint race last year ? moved from eighth on the grid to third on the opening lap, as Mick Schumacher locked up at Turn 1.

He battled Nicholas Latifi for the position before the pitstop phase began at the end of lap six when de Vries had a slow front-left tyre change, with a mechanic having to switch wheel guns before he rejoined the track.

De Vries had taken the lead at the first corner, passing polesitter Nobuharu Matsushita on his left-hand side and propelled into an early six-second lead, but this soon disappeared.

With?Matsushita slowing suddenly in the final sector of lap six, Aitken was left as the nearest challenger to de Vries, and then passed him into Turn 3 on their out lap.

Aitken continued to lead until the end for Campos?s first win since the series rebranded in 2017, despite two late safety-car periods that shortened the scheduled 29-lap race to 26 after it reached the one-hour time limit.

The first period began after Guanyu Zhou collided with the rear of Juan Manuel Correa?s Charouz-run Dallara at Turn 1, moving to the right-hand side of the American before damaging his front wing, scraping the right-hand wall and coming to a halt in the corner?s run-off area.

Another developed on the restart as Sergio Sette Camara was spun in an incident with Luca Ghiotto as the cars were approaching returning to full speed, with Louis Deletraz also becoming involved and joining the Brazilian in retiring instantly.

Jordan King ? who was worried about having damage after receiving a rear tap from Anthoine Hubert during that chaos – passed Latifi with three minutes remaining around the outside of Turn 3 to complete the podium.

Dorian Boccolacci claimed a career-best finish in the category in fifth, holding off Ghiotto at the end, though the Italian finished the race under investigation by the stewards after the restart drama.

Ghiotto had fallen to 10th early on after going wide due to Schumacher?s lock-up, and recovered to fifth before the restart, pitting under safety car and gaining five positions in under five minutes.

Hubert completed the points places after going wide and off track at Turn 1 as the race returned to green-flag action from fifth.

Matsushita was classified in 13th, while Schumacher caused a virtual safety-car period on lap nine after spinning going over the kerb at Turn 16 and being left stricken in the middle of the track.

Giuliano Alesi made contact with his Trident team-mate Ralph Boschung in the first corner of the race, spun, and was left stranded just after Turn 1, causing the first safety car appearance.