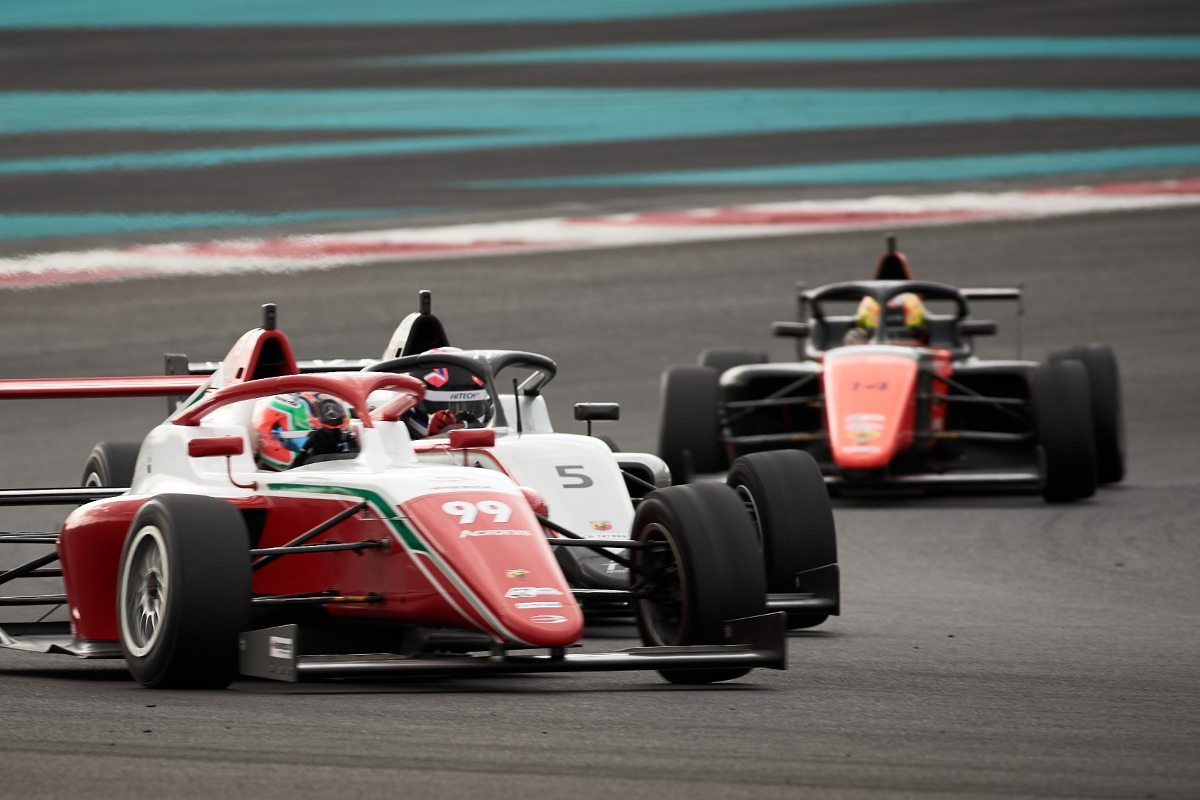 MP Motorsport’s Tasanapol Inthraphuvasak has inherited a Formula 4 United Arab Emirates win after a day in which 37 penalties were handed out.

The first of the four races in the season-opening Yas Marina Circuit round took place on Friday, with races two and three on Saturday. That day began with 11 three-place grid penalties being handed out ahead of race two.

Race one’s top 10 finishers from were all penalised for remaining at racing speed after the chequered flag was waved, as the drivers in a three-way photo finish didn’t see the flag and continued battling while those behind unsure if the race had ended or not followed for the extra lap with no yellow flags telling them to slow straight away.

Xcel Motorsport’s Jamie Day was penalised for a divebomb move that set off a chain of events that led to three retirements.

Andrea Kimi Antonelli lost his front row start and instead started fifth for race two, which he won.

The 15 penalties handed out shortly before race three concerned drivers in race two crossing over the pit exit line on the straight after the turns six/seven chicane, as F4 UAE uses the support paddock and pitlane situated there.

Drivers recieved a warning for taking a wide line on entry into turn nine, the first corner of the lap for F4, then post-race were penalised for repeat offences. A five-second penalty was incurred at first, then 10s, and eight drivers received the former while four got the latter.

Antonelli had a 5s penalty but kept his win by 0.110 seconds, but those penalised 10s fell down the order. Sohil Shah went from sixth to 10th and Rik Koen dropped out of the points from eighth to 11th to name but two.

The drivers in third to fifth all had 5s penalties but didn’t lose positions. Nikita Bedrin rose one spot to sixth, and Charlie Wurz and Taylor Barnard both rose three places to seventh and eighth.

There were also three-place grid penalties issued to Victoria Blokhina and Jules Castro.

The lateness of penalty notifications meant drivers were not warned ahead of race three not to cross the pit exit, and 11 drivers were penalised.

This time Prema’s Antonelli and James Wharton were repeat offenders, and the 10s penalty cost Antonelli victory. Prema stablemate Aiden Neate got penalised 5s in second, and so the pair dropped to third and fourth behind Inthraphuvasak and Wurz.

Koen again lost out as 5s dropped him from fifth to eighth, while Oliver Gray lost his ninth place finish. Those who profited included Global Racing Service’s Vladislav Ryabov, who pinched fifth, Barnard who moved from eighth to sixth, and Miron Pingasov and Suleiman Zanfari who each gained a point.