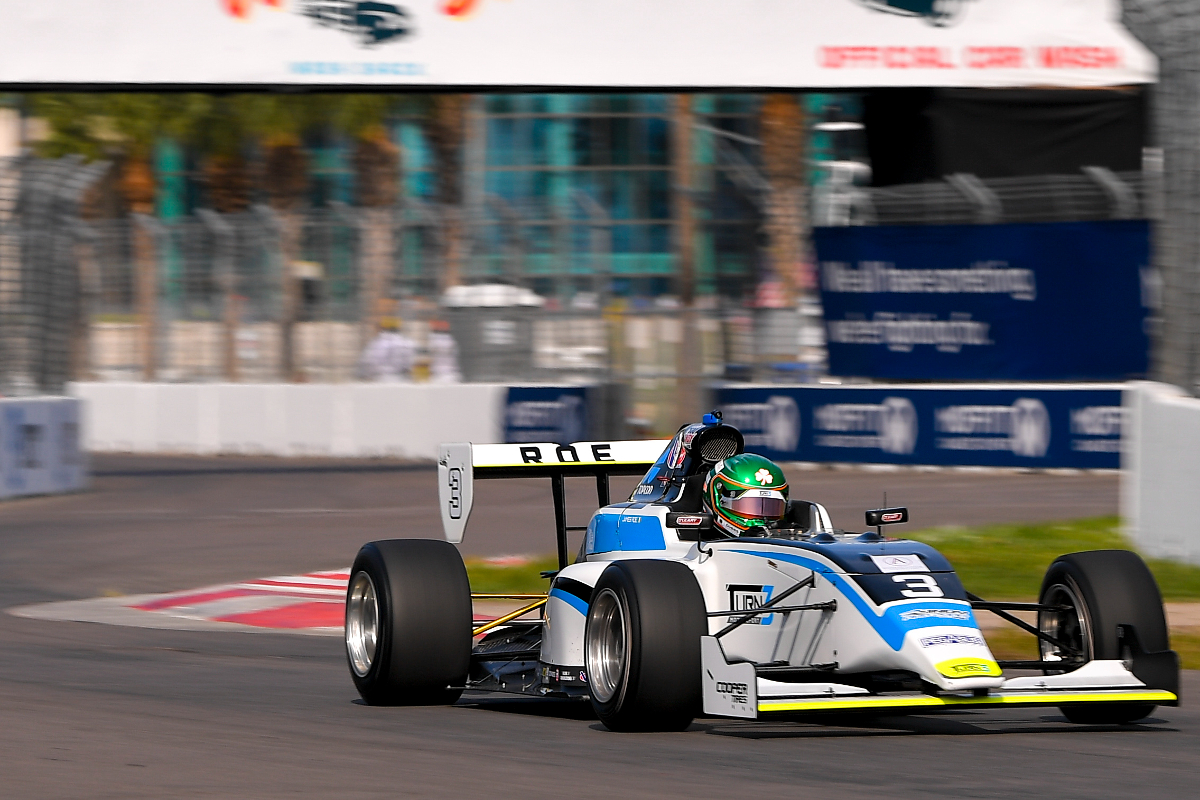 Indy Lights’ 2022 grid has grown to 11 full-time entries with the addition of James Roe Jr, and the series has announced the date of its first round.

While no calendar has been released for IndyCar’s primary support series, which is now promoted by the IndyCar-owning Penske Entertainment Corporation, it has been confirmed that St. Petersburg will host the opening round on February 25-27.

It is expected to be a double-header as in previous years, and there could be a gap of two months before the next races as that is when the lower Road to Indy rungs Indy Pro 2000 and USF2000 go to Barber Motorsports Park for their second round.

Roe steps up to Indy Lights from IP2000, and completes TJ Speed’s two-car line-up for its debut season in the championship.

The Irishman won the last race of the 2021 IP2000 season, is a race-winner in Formula Regional Americas and has been racing in America since 2018 when he was F2000 Championship Series title runner-up and appeared in USF2000.

Before that he raced extensively at home, starting his car racing career in Ginetta Junior Ireland in 2014 before moving to Britain’s BRSCC National Formula Ford 1600 series where he came fifth in 2017. He also has experience of Formula 4.

“I am extremely happy to be joining TJ Speed this coming season,” said the 23-year-old. “The goal has been to be a driver in the IndyCar series, and this is another step in my climb to achieve that goal.

“This programme is all down to the fantastic partners involved. I’m extremely grateful for the opportunity and look forward to getting to work right away with the team. We are under no illusion of what it takes to perform in Indy Lights, and I’m confident in the team around me.”

Roe picked up experience of Indy Lights’ Dallara IL-15 car in a test at Sebring last month, and will get several more test days before heading to St. Petersburg. The rest of the Road to Indy will test at Homestead-Miami Speedway on February 14/15, but Indy Lights has not release any info on its pre-season schedule and it is believed teams will be heading to Sebring again.

“We have completed a few test days with James, and he has progressed well in the transition from IP2000 to Indy Lights,” TJ Speed founder Tim Neff said.

“As a top runner in IP200 last season, we are expecting him to challenge at the front of the Indy Lights grid in 2022 alongside Kyffin [Simpson, the team’s other driver].”