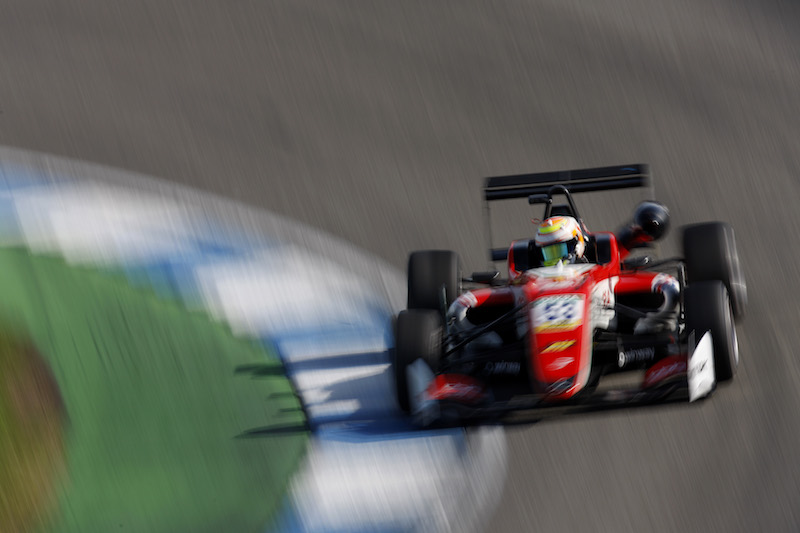 Callum Ilott was quickest again in the second qualifying session for the Formula 3 European Championship finale at Hockenheim to take pole for race two, although Maximilian Gunther edged him to race three pole.

Prema secured a top-three lock-out on the grid for both races thanks to Guan Yu Zhou, with champion-elect Lando Norris having to settle for seventh and sixth.

Having hit the track before the Prema drivers, Norris went quickest with seven minutes of the session but his time was quickly bettered by Ilott, who earlier beat his fellow Briton to pole for race one.

Gunther then went quickest, becoming the first driver to dip below the 1m32s mark, but Ilott responded on his next lap with a 1m31.685s that would remain unbeaten through the final five minutes.

Though it was 0.271s slower than Ilott, Gunther’s subsequent effort did improve on his previous best, which as his second-fastest lap was enough to beat Ilott to race three pole by 0.013s.

That is likely to come too late to salvage Gunther’s championship hopes – as he needs to win race one from 12th on the grid to deny Norris – but may help him in his fight for the runner-up position against Joel Eriksson and Ilott.

Jake Hughes grabbed fourth for both races at the very end of the session – matching the result he would have achieved in first qualifying were it not for a track limits offence.

Pedro Piquet completed a strong day with fifth place ahead of Eriksson and Norris, though he drops both behind them and the Hitech duo of Tadasuke Makino and Nikita Mazepin on the race three grid, with Ralf Aron taking 10th for both races.