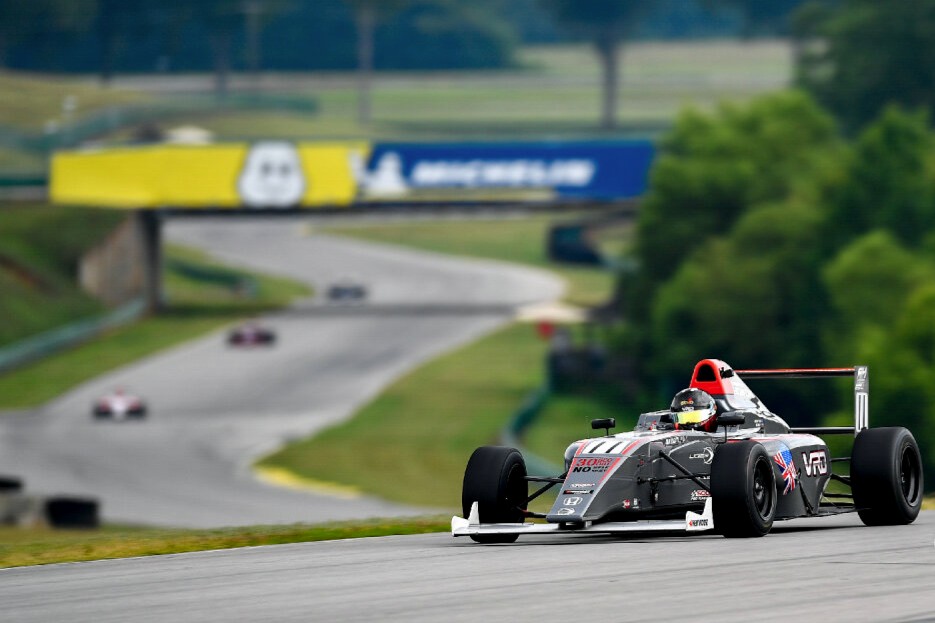 Hunter Yeany and Dylan Tavella shared the wins at Virginia International Raceway in the second United States Formula 4 round.

Velocity Racing Development’s inherited a first win of the season at Mid-Ohio, at the expense of Jay Howard Driver Development driver Christian Bogle who has now left the championship, but the race only lasted five laps and the results didn’t count to the championship.

His first real victory of the weekend came in race one at Virginia, which he led lights-to-flag.

The pace car disrupted running three times during the half-hour race, a running theme throughout the weekend.

Yeany briefly lost the lead after the first pace car period to rival Tavella, but an issue would drop the Crosslink/Kiwi Motorsport driver down the order.

Racing was paused again when Jose Blanco-Chock and Kyffin Simpson collided at the Oak Tree. Simpson was left with severe rear damage which the team worked overnight to amend.

The second restart went without an issue for Yeany, while second placed Spike Kohlbecker was drawn into a battle with Josh Sarchet.

Before Sarchet could make a move, the yellow flags were brought out again as Alex Morton made contact with the pit wall moments after the track went green.

The race ended behind the pace car, with Yeany, Kohlbecker and Sarchet taking the podium while Tavella finished 18th.

The fastest lap of the race determined the grid for race 2, putting Tavella on pole and Yeany sixth.

Second placed Kohlbecker kept the pressure on Tavella in the opening laps while Yeany was stuck in a four-car train behind Crosslink/Kiwi’s Varun Choksey. By the time Tavella managed to get into third, the top two had broken away.

However the pace car would disrupt running multiple times, allowing Yeany to close in on the leaders.

Yeany and fourth placed driver Nicholas Rivers ran alongside Kohlbecker on the restart. The trio swapped places multiple times, while keeping Tavella within touching distance. It was Yeany in second when the pace car was brought out for a second time, almost colliding with Tavella when the leader slowed down for yellow flags.

Tavella couldn’t shake Yeany on the restart and briefly lost the lead to his rival. Rivers joined the pair to make it a three-way fight for the lead. Both Tavella and Rivers were able to pass Yeany, just before another pace car was brought out. As in race one, racing wouldn’t resume and Tavella won the race.

Race three resumed where race two left off. Despite starting fifth, Tavella was leading the field by the end of lap one, in part due to a strong start that saw him go three-wide with Ronan Murphy and Rivers.

Between multiple pace car periods, Yeany and Rivers joined Tavella at the front of the field in a battle for the lead. Yeany had the advantage in the closing stages of the race when a small tap from behind sent Rivers into a spin. He was unable to recover, bringing out the final pace car of the day.