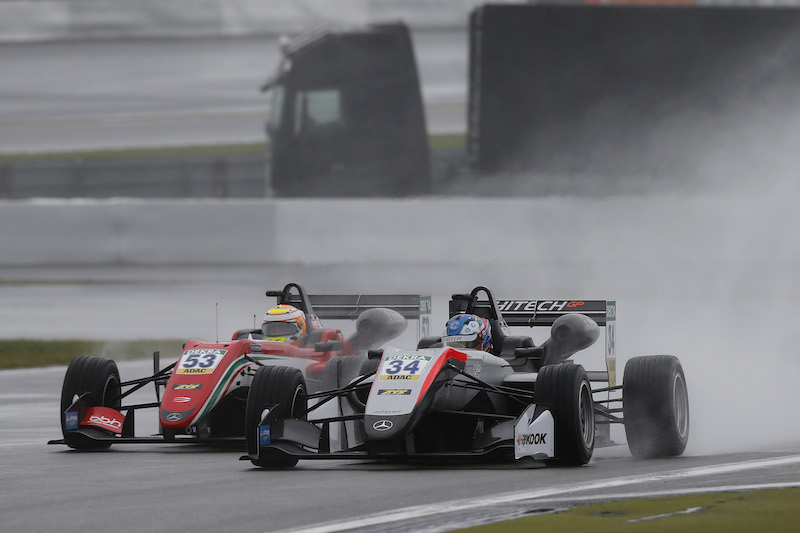 Jake Hughes and Callum Ilott shared the pole positions in an even wetter Formula 3 European Championship qualifying two at the Nurburgring.

For race three, Hughes will start in third with Ilott and Norris moving up a place each to take the front row of the grid.

It was another wet qualifying session, having had wet conditions in qualifying for race one on Friday.

Norris set the initial pace in the 20-minute session, but was soon overtaken by a number of drivers.

Hughes set a 1m38.047s early on in the session to show his pace for the session, going almost 1.3 seconds faster than Norris.

Ralf Aron would briefly find himself at the top of the timesheets, setting a 1:37.710, but Norris, Ilott, Hughes, Tadasuke Makino and Ferdinand Habsburg all jumped ahead at the end of the session.

It means Makino will start race two in fourth: the same position he finished in race one before being handed a penalty for a full course yellow infraction that dropped him to seventh.

Habsburg and Aron start sixth and seventh respectively for race two, ahead of Guanyu Zhou, Joey Mawson and Max Defourny who round out the top 10.

For race three, Aron will start in fourth ahead of Zhou, Habsburg, Makino, Mawson, Defourny and Jehan Daruvala.

Norris? closest two rivals in the standings had torrid sessions, with Maximilian Gunther and Joel Eriksson taking 15th and 17th respectively on the grid for race two, and 14th and 16th for race three.