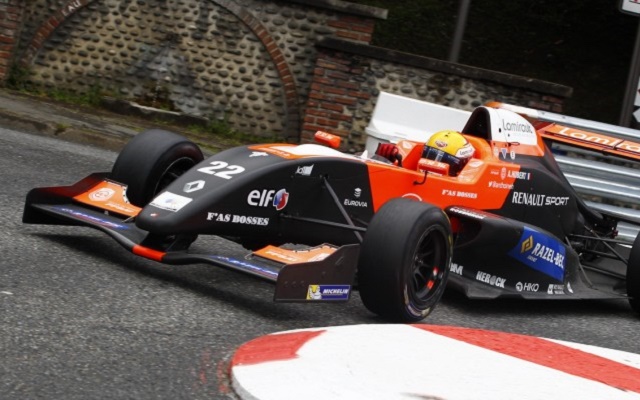 Tech 1 Racing’s Anthoine Hubert has taken his second win in three Alps races in 2015, leading the first race of the Pau round from pole and to the checkered flag.

But with Hubert doing a part-time campaign and ineligible for points, it’s Matevos Isaakyan who will take the 25 points from the race as the Russian took second – the same result he claimed on his Formula Renault debut at Pau last year.

Isaakyan passed Hubert’s teammate Simon Gachet in the opening corners to slot in behind the race leader, staying within a second of Hubert for most of the distance.

But with Gachet keeping up in third, Isaakyan did not end up seriously challenging for first, seemingly content with runner-up and the maximum points haul.

For Hubert, the win meant he took to the podium for the fifth time in six Formula Renault races in 2015.

A brief early safety car period was initiated by Denis Bulatov going into the barriers, while Matteo Ferrer and Bruno Baptista joined him among the retirements later on in the race.

Vasily Romanov was set to start in third, but his car refused to get going for the formation lap and he missed the race entirely.