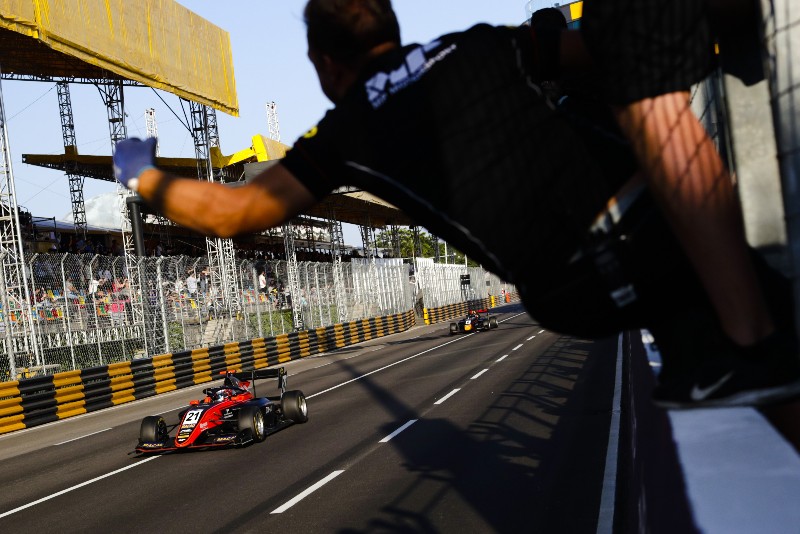 If you trek through the Macau Grand Prix’s entire history as a single-seater race back to 1961, you’ll see the rarity of a rookie driver or team taking victory – so why was it a case of success for both in 2019?

Every driver who races around Macau’s Guia Circuit will comment on how unique and special the location and experience is.

The scale at which it differs to almost every other circuit in use today makes it especially challenging, and nowhere is this epitomised better than 2019 Macau GP-winning Dutchman Richard Verschoor reporting that he was suffering from dizziness after attacking the circuit at speed for the first time in Thursday’s free practice session.

His 2m08.987s lap, which put him fifth fastest and as top rookie in the session, had an average speed of 106.1mph – quicker than anyone had ever gone around Macau prior to the introduction of FIA Formula 3’s Dallara F3 2019 car for this year.

The 3.4-litre V6-powered car, which is capable of 380bhp, is heavier and more powerful than the Dallara F317 which was previously used in Macau, and with the use of the Drag Reduction System overtaking aid, it meant that straight-line speeds were significantly above anything seen in the city-state before.

As a result, the five long straights making up the first and final sectors of the lap contributed less to the total lap time than had ever done before, but slower cornering speeds and wider cars meant there was an even heavier reliance on overtaking occurring along those straights. 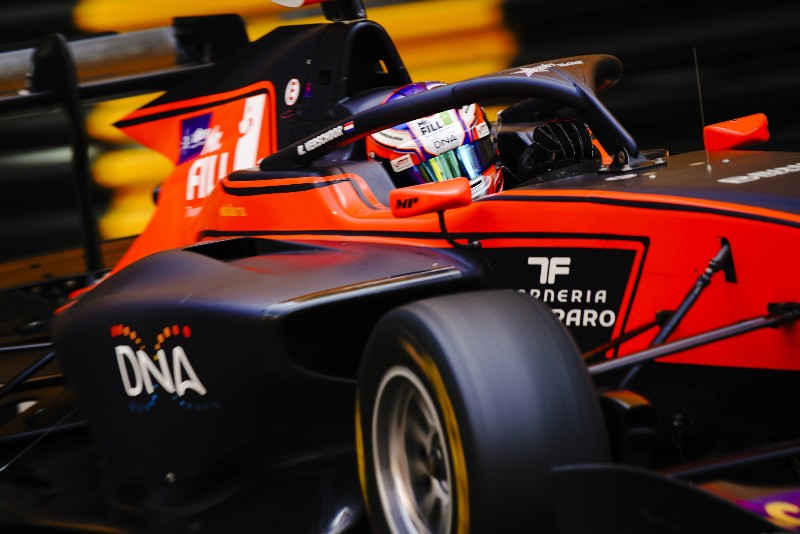 Macau already poses teams a set-up conundrum, with experience always counting at a circuit which can’t be tested on outside of the race weekend, but having a brand new car with different characteristics swept that experience under the table.

It was reasonable to then assume that the FIA F3 pecking order would continue into Macau, especially given Prema’s absolute dominance of the championship in its inaugural season, but Macau’s bumpy streets meant any exploitation in ride-height or suspension set-up found during the season were rendered void.

And unlike most of the FIA F3 circuits with their expansive run-off areas, the ‘go hard or go home’ approach required for Macau’s twisting middle sectors really splits the very best drivers from those who can usually hide behind superior machinery.

As it turned out, Prema was the team to beat for most of the weekend, while Verschoor’s MP Motorsport squad and several others looked fast but not quite strong enough to better the Italian outfit.

Formula Regional European champion Frederik Vesti was understandably the weakest of the Prema trio, having never raced the FIA F3 car before, and therefore he was never in victory contention. Marcus Armstrong was a contender and had just set a new track record in qualifying before he pushed too hard and crashed. This compromised his starting spot for the qualification race, and then both he and Vesti were held up by an opening lap crash that left them near the very back of the field.

FIA F3 champion Robert Shwartzman was pipped to pole by Hitech GP’s Juri Vips, and after feeling he “took it too easy” in the qualification race then had his wheel-to-wheel approach backfire just a few seconds into the grand prix after clipping his front wing on ART Grand Prix’s Christian Lundgaard. Before the first braking point of the race, Prema had been nullified.

Red Bull junior Vips claimed to have struggled in qualifying despite taking pole, then put his qualification race win down to a “mega start”. Verschoor qualified an impressive fifth and finished fourth in that race, which meant if he nailed his start in the grand prix he could take advantage of any errors from those upfront.

Despite struggling with starts all season, Lundgaard was blinding off the line in both races and was already ahead of Shwartzman when they made contact. Verschoor’s own start wasn’t great in the grand prix, but by moving to the inside line he had a shorter run through the Mandarin kink and breezed past the about-to-clash Lundgaard and Shwartzman as a result.

In the qualification race, Verschoor hadn’t matched Vips on race pace, but neither did he need to after establishing himself in a safe fourth place. Whether he could or couldn’t in the grand prix didn’t really matter once the safety car was called out a few laps into the race, as he just needed to make use of Vips’ vulnerability on the restart to get ahead.

He did just that, and Vips’ attempts to break the tow only resulted in the space on the outside of the track – the grippier line – being free for Verschoor to take through Mandarin. The side-draft meant he had edged ahead into the lead, but Vips had chosen the inside line knowing he could hang out Verschoor to dry on the outside for the first braking zone at Lisboa.

As with all Macau wins, it was the individual input that made the difference when it mattered, and Verschoor braked later and stuck his car on the racing line to decisively take first place. 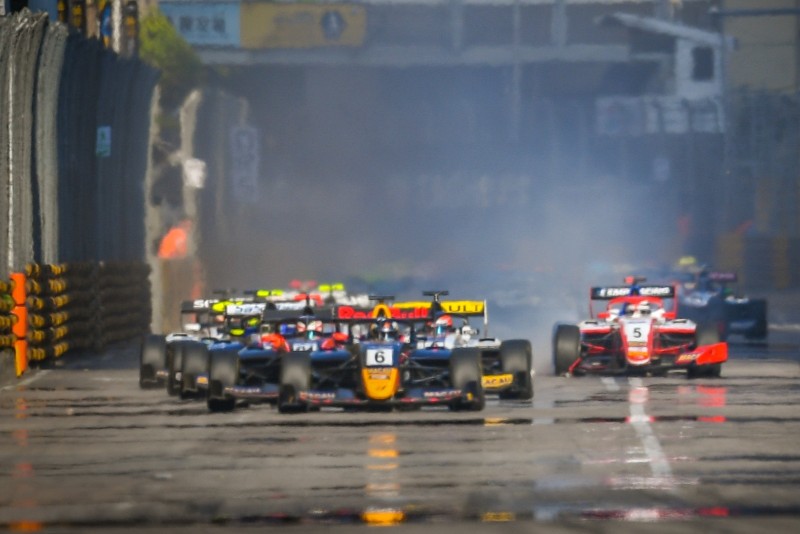 Vips evidently had more pace, especially after Verschoor pranged a barrier that bent his steering, but it was making the right decision on the run to Lisboa by Verschoor each time that prevented Vips from making a way back past.

On one occasion Verschoor turned in as late as possible on the inside, resulting in Vips flat-spotting his tyres and almost heading down the escape road.

Verschoor then starting making late switches to the outside just before Lisboa, opening up the inside line for Vips, possibly with the intention of fooling him into attempting a late-braking lunge which would cause further damage to his rubber.

If that was the case, then Vips was wise to it and didn’t fall for the bait, and with the positions remaining the same, it meant Verschoor took a surprise victory.

MP was in such disbelief post-race that it couldn’t pinpoint why the team’s set-up had proven so effective – with Liam Lawson also rising from 20th to seventh -? but did praise Verschoor’s decisions in attack and defence in the press conference.

Verschoor looks to gather budget for graduation to a higher formula for next year, although Macau marks just his second race win outside of the Toyota Racing Series since graduating from Formula 4 in 2016.

MP meanwhile is buoyed not only by its breakthrough Macau result on its first ever appearance – last achieved by Paul Stewart Racing in 1994 and West Surrey Racing in 1983 – but that Paolo Angilella will be switching camps from Prema, a team he has helped establish as the dominant F3 force, to join the ambitious Dutch outfit in 2020. 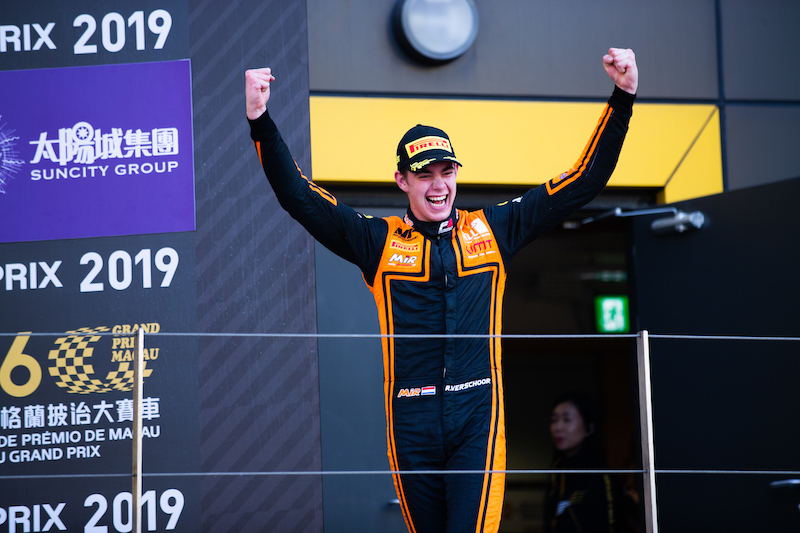