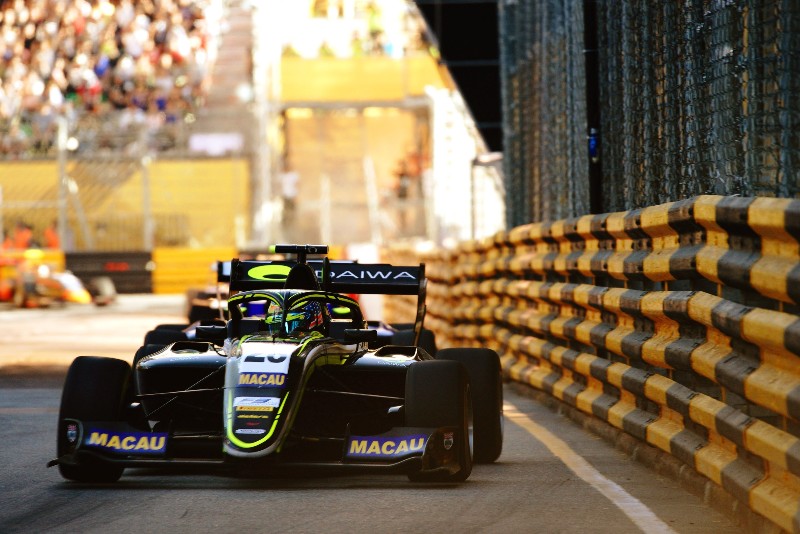 Carlin drivers Logan Sargeant and Dan Ticktum have credited the work of their Carlin team over the Macau Grand Prix weekend, which resulted in Sargeant finishing third.

The American raced for Carlin in FIA Formula 3 Championship this year, along with other Macau team-mate Felipe Drugovich, and their irregular scoring meant the team was the ninth best of 10 in the standings.

In Macau, Sargeant and Ticktum were among the fastest, and while the weekend didn’t go to plan for two-time winner Ticktum, rookie Sargeant was able to finish third – a result he was targeting after finishing sixth in the qualification race.

“[The podium] was always a possibility,” said Sargeant after the grand prix.

“We gave it everything we had. Just hard work between myself and the team, and that’s what you get.

“I had a decent enough start, nothing special. I got a good run through Mandarin, and I picked up a couple of positions. Then it was just picking them off one-by-one and trying to catch the leaders.

“I was looking pretty good until the Virtual Safety Car, then I lost temperature in my tyres and I never really felt the grip again.

“That was a bit of a shame, as I was catching them at one stage. I’ll take third, it’s my debut, and I’ll be back next year to win it.

“[Carlin’s] done an absolutely brilliant job this weekend. We’ve definitely improved the car from this season, and I think we showed that this weekend.

Sargeant took a best finish of eighth in FIA F3 this season, his third year of car racing, and was 19th in the standings.

“Another year at the best track in the world done,” Ticktum said on Instagram.

“I had fun racing today from 27th to 13th. The pace in myself and the car was definitely enough to fight for the win this weekend but it just wasn?t meant to be.”

After a free practice crash, Ticktum missed half of the second qualifying session then finished the qualification race at the back after an opening lap crash.

“Cannot thank Carlin enough for the opportunity to drive at this amazing place again, and also for the amount of work the mechanics had to do to keep fixing the car after unfortunate incidents.

“I?ve had good luck, bad luck and make your own luck over the last few years at Macau but this one was just very unlucky.

“I hope to be back next year to try for that third win again.”