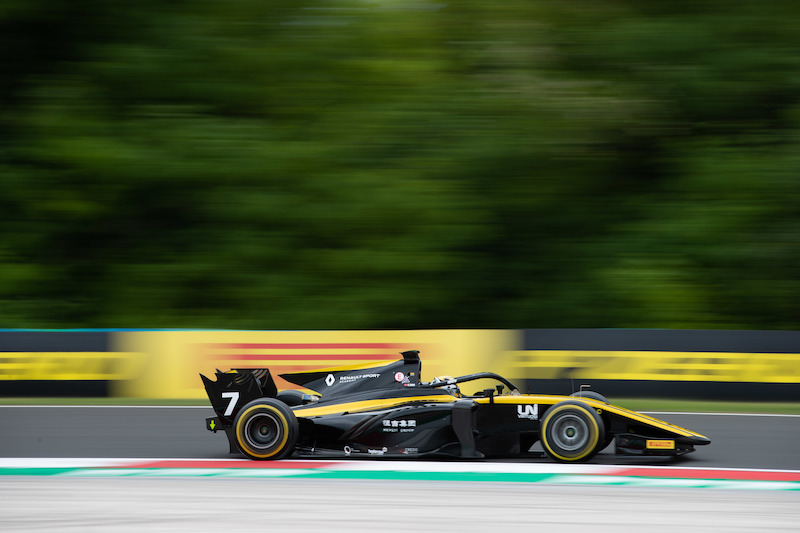 A promising Chinese driver has long been seen as something of a holy grail for Formula 1: a key that could unlock the door to world’s most populous nation and its rapidly growing economy. In 2019, the chances of F1 having its first Chinese driver in the near future have skyrocketed thanks to the surprisingly strong form of Formula 2 rookie Guanyu Zhou.

Right now, Zhou is being tipped by some as not just the greatest Chinese prospect in junior single-seaters, but as the best F1 prospect in F2 bar none.

OK, so this year’s F2 grid is not the greatest the series has ever had, but between the experienced talents fighting for the championship and a rookie crop that includes the reigning GP3 and European Formula 3 champions, it’s solid competition against which Zhou has had to make his mark.

It has been those performances relative to other F2 newcomers that have perhaps really made Zhou stand out so far. His fellow Renault Sport Academy protege Anthoine Hubert is making at least an equal claim to have been the star rookie so far, performing wonders on occasion with a struggling Arden team.

But in championship terms, Zhou is the pick of the bunch, and while he has underneath him one of the category’s strongest packages courtesy of the Virtuosi team, he has had to make a bigger step up from European F3, without any of the experience with the Pirelli tyres that Hubert built up during his two-year stint in GP3.

Tyre management is key to success in F2, and something that has so far held back Zhou’s former F3 team-mate Mick Schumacher (the most fancied of the rookies coming into the year, who pre-Spa has the sixth-best qualifying average yet is only 11th in the points). Even Lando Norris admitted to struggling with it when he made the same jump last season. 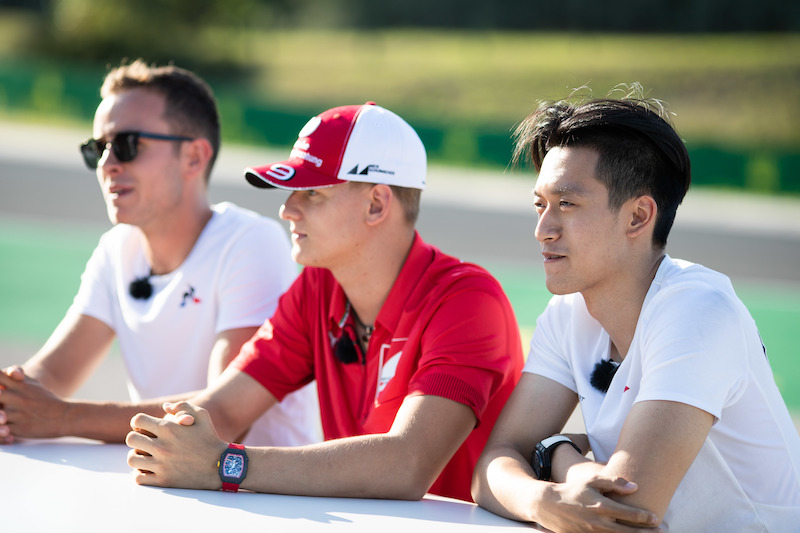 For Zhou to have been such a cut above Schumacher so far is especially interesting, given the way their 2018 seasons turned out as team-mates in the all-conquering Prema European F3 squad. While Schumacher romped to the title with his late-season run of wins, Zhou was – like three-fifths of a super-strong Prema quintet – frustrated about the way his title bid vanished over the second half of the year.

Zhou’s three-year tenure in F3 was one where his he struggled to justify on merit his place on the Ferrari Driver Academy, one he’d held since karts. He had jumped up to F3 relatively early, with just a year in Formula 4 under his belt, and podiums in his rookie campaign with Motopark were a sign of promise. But his second year lacked obvious improvement despite a move back to Prema, and his third season ended with him eighth in the standings (just as the previous season) despite this time making a clear step forward in performance. A spate of incidents, including with Schumacher, hampered his chances, as did a loss of qualifying form at a key moment.

“That period we had good times, hard times,” Zhou says of his F3 stint. “Last year was definitely the most difficult time, because I had a chance for the win, almost leading the championship for the whole first half of the season, and then it just went downhill afterwards.”

This time last year it was not Zhou being talked about as the most serious Chinese F1 prospect, but Yifei Ye, whose corresponding title bid in the Formula Renault Eurocup had lasted longer. But although Renault signed Ye ahead his move into FIA F3, where he’s yet to score a single point, it’s the capture of Zhou earlier in the off-season that now looks like a shrewd piece of business. The switch also appears from the outside to have done Zhou the world of good.

“My dream was always Formula 1,” he says. “Joining Renault, [there’s] so much opportunities for me to be involved with the F1 project. As a development driver I get time in the simulator, developing the car. At the same time I’m doing RS17 tests and doing a lot of roadshows for the team. It’s been great so far. I’m just happy they’ve given me this opportunity and trust me to do all this.” 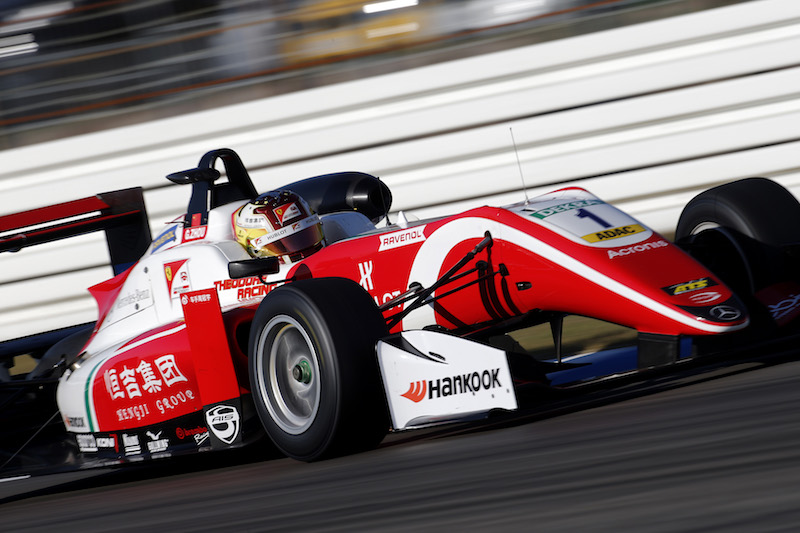 At the moment, Zhou’s testing with Renault has been limited to the two-year-old RS17, with mileage in such cars less restrained by the regulations. But although he won’t be drawn on any specifics, his first run-out in Renault’s current F1 challenger must surely be just around the corner given his F2 form.

That form began with a fine fourth place in the Bahrain sprint race, where his rapid adaptation to the tyres was already on show. By round three at Barcelona, he’d led a feature race and finished it in third. Further podiums came in the Monaco and Paul Ricard sprints, before he impressively beat veteran team-mate Luca Ghiotto to take his maiden pole position at Silverstone.

“Definitely happy,” is Zhou’s summary. “[Some] unlucky moments as well, but overall I’m happy and impressed with how me and the team are doing so far. We’ve done a good job for a rookie season. A few times I’ve been on the podium, leading the race, we were so close to getting the first win, in the feature race as well. So it’s always a nice feeling, and gives me a good boost to keep going.”

His season has not only exceeded the pre-season predictions of observers, but also of Zhou himself.

“The expectation was just scoring OK points in the beginning and trying to step on the podium in the end of the season, but we’ve done that already in round three,” he says. “We knew we had the pace but the race is different. I’m just happy that I’m getting used to the racing quite quickly, also the car. I’m still learning the tyres each race, because the tyre management is always the key for the races, but so far, so good.”

Is his team also surprised? “Slightly,” admits Andy Roche. “The target was possibly a win or a podium in race two this year. We’ve exceeded that very early in the year. He just needs a win under his belt now, and I think it’s coming. It’s just tyre management really. There’s not much to come, a little tweak and it will come very quickly.”

Before rebranding this season, the Virtuosi team was behind Russian Time’s successes of the past few years with Artem Markelov in particular, who consistently shone in races thank to his ability to look after his tyres. This experience and expertise has helped Zhou to get up to speed in that area, while he can also lean on Ghiotto, now in his fourth year at this level, for valuable advice. 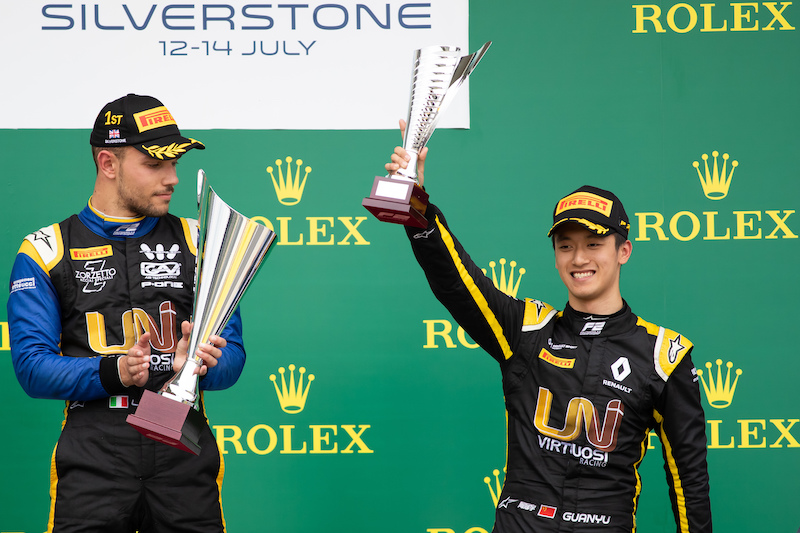 “With Artem, we can check his data from the past and look for this,” says Zhou. “But at the same time as a driver I think you have to actually feel while you’re driving. Luca is an experienced team-mate, he can talk me through what is the key for each track.”

Roche adds: “Artem was exceptional on tyre management and that’s helped a lot. We do a lot of work on it as well. A lot of attention goes into that side of it, for sure.”

What’s also helped Zhou to impress this year is the way that Virtuosi has improved its qualifying form to match its prowess in race trim, as evidenced by its front row lock-out on home soil at Silverstone.

Zhou himself has also adapted himself to the unique demands of F2 qualifying, where the softest of the available compounds is sometimes good only for one flying lap. He feels getting the most out of that has in fact been his strongest suit so far, while he’s still learning over race distances. 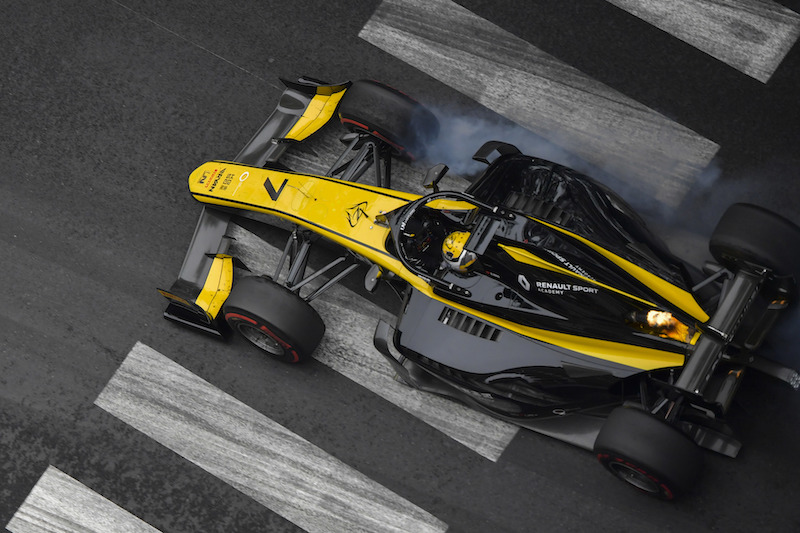 When Zhou made the move to Europe as a teenaged karter, he landed in Sheffield in the north of England, competing with the Strawberry Racing team. His mechanic from those days, Mark Salmon, continues to accompany him to every race, and switching from Prema and Maranello to Virtuosi and Enstone has almost been like a homecoming for the driver affectionately known as ‘Joe’.

“I’ve been living in the UK for a long time so I knew how English people work or how an English team works,” he says. “My engineer, I knew him since many years, even though it’s the first year together, but it’s always nice when you already know the people.” Pau Rivera previously engineered Markelov in both F2 and the Toyota Racing Series, where Zhou was in the same M2 Competition squad in 2016.

Roche says “Joe’s been absolutely great to work with” and believes that his ability to learn is his greatest strength.

“Everything he hears or sees, he soaks it all up and he can act on it. A lot of drivers, it doesn’t compute, it gets forgotten, whereas Joe will work and work and work until he gets it, and I think that’s going to be his strength. He learns so quickly, and once it’s learnt once, it’s learnt, it doesn’t get forgotten, and that will be a strength for him for sure.”

The project between Zhou and Virtuosi was always due to be a two-year one, and Zhou says his strong results as a rookie are unlikely to change that.

“The key is probably to do two years, first year learning, second year to be getting these results,” he says. “I think in the first year if I can finish in the top six in the championship it’s already a good sign, so next year I can just improve that.

“The key is to be successful in Formula 2 and then you definitely have the driving ability or talent to be moving up.”

There’s no doubting that Zhou has the commercial strengths to ease his path into an F1 seat once that two-year F2 programme is complete. But does he have that talent?

“Absolutely,” reckons Roche, whose team’s roots lie in the successful Super Nova Formula 3000 squad, where he worked with champions such as Juan Pablo Montoya and Sebastien Bourdais.

“It’s like all these things, you just have to be in the right place at the right time, and I think he is. The commercial aspect is a big thing for Formula 1. 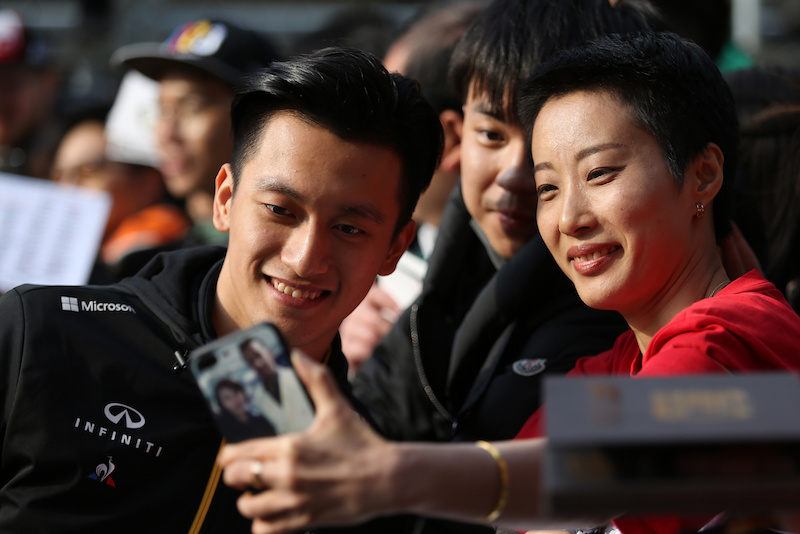