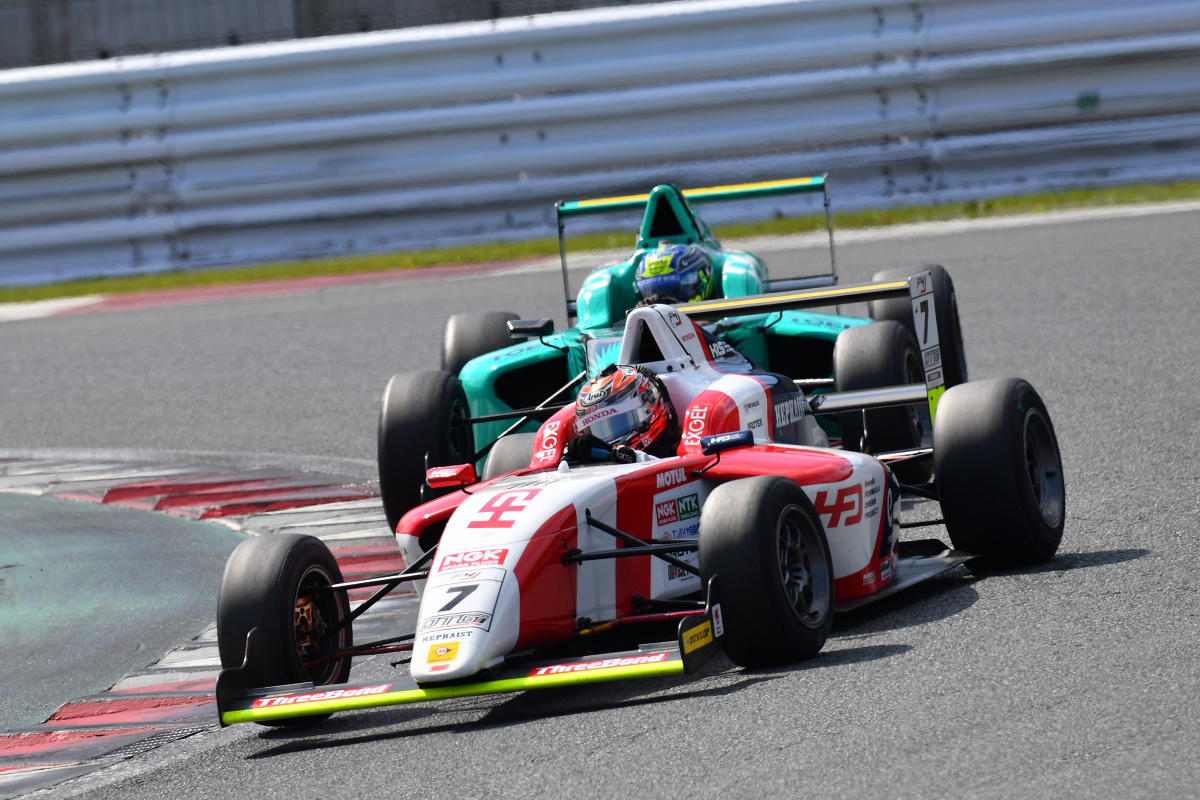 Honda junior Yusuke Mitsui leads the Japanese Formula 4 standings after round one at Fuji Speedway, despite starting no higher than sixth.

Mitsui was fourth in his qualifying group (with the 42-car grid split into two), but benefited from a grid penalty to start race one from sixth.

Ahead of him were Honda’s Syun Koide and Kazuma Nishimura, Toyota junior Rin Arakawa, Shunji Okumoto and Reimei Ito.

Nishimura beat poleman Koide off the line, but on the outside Koide carried more speed into 1st corner to keep ahead until his rear-right wheel touched Nishimura’s front-left at the apex and he spun to the back and then retired.

Arakawa had to avoid the spinning car and dropped to 16th, and Nishimura led Okumuto, Mitsui and Ito at the end of lap one.

On lap three the chasers went three-wide into 1st and Ito went from fourth to second around the outside, and Bionic Jack Racing’s drivers soon got involved in the battle behind which led to the gaps ebbing and flowing thereon.

Mitsui fought Ito for second several times before being sucked into battle with those behind once more, but when Nishimura had to serve a drive-through penalty for spinning Koide it became a three-way lead fight with a gap to Okumoto in fourth and then a train of cars that included the charging Arakawa.

He had got back up to seventh by mid-race, and once in fifth he went chasing down Okumoto. Arakawa got the move done late on the last lap, as Ito won. However he had been out of position at the start, and a five-second penalty dropped him behind new victor Mitsui and Yugo Iwasawa.

Koide claimed race two pole too, and this time made it through 1st without issue. After that he was untouchable, opening up a lead of five seconds over 14 laps while drivers fought behind.

That became eight seconds post-race when runner-up Arakawa was penalised 40s for overtaking off-track on lap one and for aggressively defending, and Mitsui was promoted to second place. He had prevailed in a race-long battle with Ito, and had come from seventh on the grid to do so.

Iwasawa was promoted to fourth, and with Wataru Yoshimura and Toyota’s Ryoma Henzan spun out of the frantic battles behind it was Toyota’s Rikuto Kobayashi who took fifth.