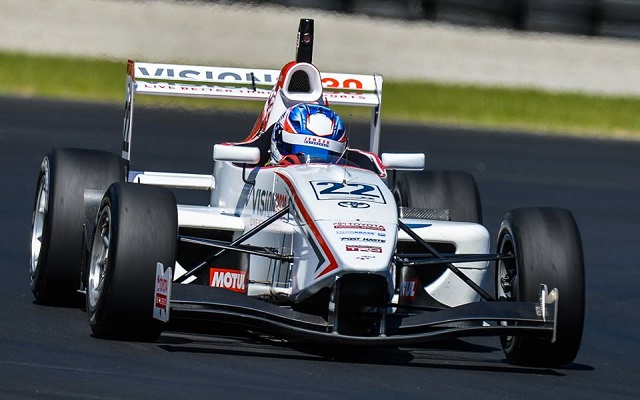 Neale Motorsport’s Andrew Tang and Victory Motor Racing’s Damon Leitch added their names to the list of feature race polesitters of the 2014 Toyota Racing Series season, taking a pole each at Highlands.

The drivers took a while in getting up to pace during the opening session, which wasn’t helped out by an early red flag brought out by Neil Alberico‘s shunt. Championship leader Martin Rump held on to first for most of the session, but dropped back in the closing minutes of the session.

A number of drivers briefly led the proceedings before Tang put in a decisive lap in the final three minutes, which wasn’t matched for the remainder of the session. Rump moved back up the leaderboards to take second, ahead of teammates Jann Mardenborough and Ryan Tveter, who lined up on row two.

Steijn Schothorst and Egor Orudzhev occupied row three, with Leitch and Levin Amweg lining up in seventh and eighth respectively. James Munro and Robin Hansson rounded out the top ten.

The laptimes in session two were much quicker right off the bat and it was Giles racer Rump who seemed most comfortable with the track, topping the timesheets and subsequently surpassing the 1:30 mark.

A red flag with four minutes to go appeared to have sealed the deal for the Estonian. However, in a last-chance effort, it was Kiwi racer Leitch who managed to steal pole.

With Rump remaining in second, Mardenborough and Tveter were again right behind, with Schothorst taking another fifth.

Amweg settled for sixth, with Tang, Macauley Jones, Gustavo Lima and Munro making up the rest of the top ten.